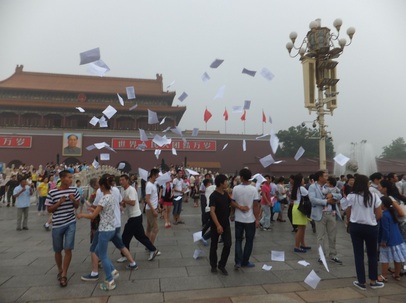 Via Imgur: “My trip to Tiananmen Square was interrupted by a protest.”

Punishment for anti-Japanese rioters. “Courts in the western Chinese city of Xi’an sentenced 12 people Friday to up to 10 years in prison for attacks on Japanese-brand vehicles and a driver during a wave of anti-Japanese violence in September. // The attacks came amid public anger over the Japanese government’s purchase of a tiny uninhabited East China Sea island group north of Taiwan that China claims as its territory. Angry demonstrations broke out in a number of Chinese cities, although those in Xi’an were by far the most violent, with Japanese department stores and restaurants in the downtown area smashed, looted and burned.” (AP)

Punishment for poultry plant fire. “Eleven civil servants have been detained over suspicions that their derelictions of duty contributed to a poultry plant fire that left 121 people dead in northeast China’s Jilin Province in June, the country’s top procuratorate said Thursday. // The Supreme People’s Procuratorate (SPP) said four persons allegedly hold the responsibility for the accident, including the chief of Mishazi Township Liu Zhenxiang, and the former head of the local construction bureau Song Limin.” (Xinhua)

Keeping with a theme… punishment for colliery blast. “More than 100 Chinese officials and enterprise executives found to be responsible for two deadly workplace accidents were prosecuted, sacked, demoted or given disciplinary punishment, the State Council said Saturday.” (Xinhua)

Henan rioters take two hostage: “Rioters beat up two policemen and took them hostage in a raid on a police station in southwestern Guangdong on Saturday, after a dispute over a village accident spiralled out of control, Xinhua reported yesterday. // More than 40 Henan natives gathered in 30 cars outside Xiangshan Weihe police station in Gaozhou’s Shegu township at 5pm.” (SCMP)

Black lung sufferers get money. “Twenty-six workers with black lung disease have signed away their rights of appeal to a local government in Henan Province in exchange for 50,000 yuan ($8,155) each in compensation. // All 26 affected workers worked as stone crushers at the Dengfeng Guo’an Silica Company in central Henan Province before being diagnosed with black lung disease, or pneumoconiosis, the Beijing Times reported on Sunday.” (Global Times)

Shudder. “A four-year-old girl found begging naked and smoking cigarettes in Nanjing has been returned to her hometown, police said, after outrage online prompted authorities to action. // Disturbing photos of the girl kneeling and begging for money on the streets of the Jiangsu provincial capital have shocked the nation in the last two days. Photos of the child and her father begging were shared tens of thousands of times online.” (SCMP)

Human-caused extinctions remain sad. “In June, researchers collected eggs from the last mating pair of the critically endangered Yangtze giant softshell turtle (Rafetus swinhoei) in the hopes that at least one will be fertile. // The 220-pound (100-kilogram) freshwater giant, which spends most of its life burrowing in mud, was once common in its namesake Yangtze River, China’s Lake Taihu and Yunnan Province, and parts of Vietnam. // By the late 1990s, however, human encroachment and poaching for use of the shells in Chinese traditional medicine rapidly depleted the population. Now, a total of four animals are known—two wild males in Vietnam and the mating pair at Suzhou Zoo.” (National Geographic)

On Jeremy Lin’s identities. “Jeremy Lin was largely unknown prior to the phenomenon known as ‘Linsanity’ in February 2012. This piece compares and contrasts the ways in which Lin’s story – and in particular his cultural, political and national identity – has played out in the USA, Taiwan and China, and also shows how the identities created for Lin in each of these three places constitute his ‘three bodies.’” (The International Journal of the History of Sport)

"military coup" is 军事政变 (jūnshì zhèngbiàn) in Chinese, but it's a blocked term on Sina Weibo.

Having a good day in Beijing is all about being able to see the mountains #beijing #photography #landscape pic.twitter.com/htHbcCIEuQ 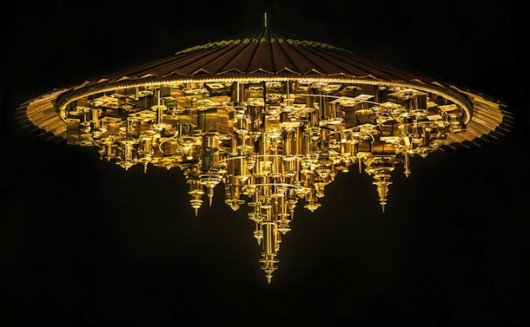 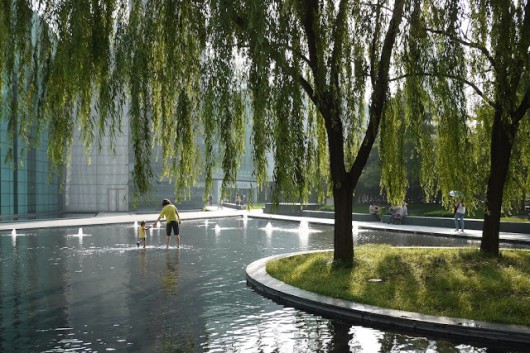