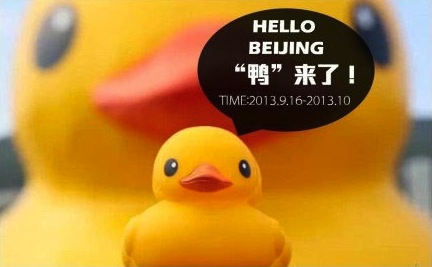 Ever since we found out that Florentijn Hofman’s famous Rubber Duck was coming to Beijing, the question has been: where will it be placed? Houhai? The National Center for the Performing Arts (“The Egg”)? Zhang Xin‘s personal swimming pool?

Summer Palace, it turns out.

The lake, which is part of the former imperial summer palace was chosen as a venue for Beijing’s version of Hong Kong’s giant rubber duck, which floated in Victoria Harbour earlier this year, organisers of Beijing Design Week said on Thursday in a microblog post.

Get excited! …to the best of your ability and such. The following is from Design Week’s Weibo: