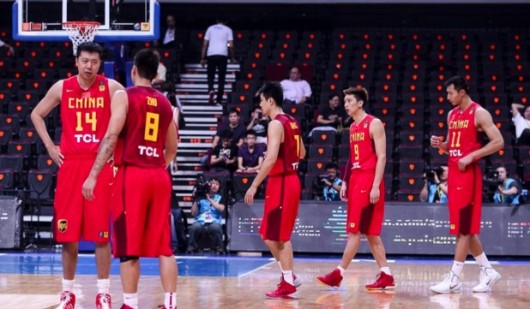 It’s all over but the crying for the Chinese basketball team at the 2013 FIBA Asia Championship after a shocking 18-point defeat at the hands of Chinese Taipei in the quarterfinals today. With Yi Jianlian scoring the first bucket and Zhu Fangyu and Wang Shipeng hitting shots from the outside, China jumped out to an 8-3, then 13-5 lead, and at one point in the 2nd quarter was up by 17. CCTV-5 commentators, openly rooting for China, said Taiwan (“Chinese Taipei”) looked like “little brother playing big brother.”

And then, something weird happened. Little brother grew up right before our eyes.

Taipei began chipping away at the deficit starting in the middle of the second quarter, but they got a huge exclamation mark as time expired on the first half. Hung Chih-Shan, with time running down, pulled up from half court and drained the shot to bring Taipei to within 10.

Still, CCTV’s commentators weren’t fazed. At halftime, they talked about tomorrow’s would-be semifinal against Iran, because yeah, Taipei had momentum, but there was no way China would lose a double-digit lead to a team they had never lost to before, right?

We repeat: never lost to before… until just now.

Every loose ball bounced Taipei’s way in the second half. Yi Jianlian got stuffed by the rim. China’s shots rimmed out. Quincy Davis III, a naturalized Taiwan citizen, at one point made 12 of 13 shots. (He finished with 26 points and 10 rebounds.) Taipei’s Tsai Wenchen added 21 points. The entire team caught fire from the perimeter. Lu Cheng-Ju’s three-pointer with just under seven minutes to go in the third quarter gave Taipei a stunning 55-52 lead, its first of the game.

And then, for fans of China’s basketball team, the fourth quarter must have been hard to watch. After seeing Taiwan extend its lead from 5 to 8 to 9… to 12.. to 15… after watching Taiwan’s players pump-fake at the three-point line and drive in for uncontested dunks… China’s players gave up. There’s no other way to put it. They went through the motions, drove to the basket, threw up three-pointers, but it was all over. Taiwan’s players on the bench, meanwhile, locked their arms together, as they did earlier in the tournament when they defeated the Philippines. And now Taiwan, the Cinderella team of the tournament, is moving on, to face Iran in the semis.

Near the end of the game, a Taipei player took a step-back three with the shot clock winding down to make the score 94-76. Taipei’s bench exploded. The players and staff could barely hold each other back. One assistant looked like he was going to explode with euphoria. The CCTV-5 announcers didn’t acknowledge the play. Not just didn’t acknowledge: it was as if they had turned their TV monitors off (they were commentating from a Beijing studio). It was as if they were in a library, stroking their chins as they discussed how China could recover. China had held a 17-point lead, and now a graphic appeared on the screen saying this: Biggest lead of the game, 18, Chinese Taipei.

The final was 96-78. The result was shocking, but make no mistake: it’s no fluke. Chinese Taipei, right now, might be the better team.

Yi Jianlian — who scored 22 and had 10 rebounds, doing everything he could — sat alone on the bench afterwards while Taipei’s players celebrated. For Chinese basketball, what comes next is soul-searching. Its last major tournament before this one was the 2012 London Olympics, when it lost every game and looked like the worst team in the field. Could it be that they’re no longer one of the top four in Asia, this after winning this exact tournament two years ago?

The CCTV-5 commentators, who had been so boastfully confident before, signed off with these words: “We’ll say this again: if, viewers, you go away, stop watching, stop caring, then Chinese basketball really has no hope. We’ll continue, whether in victory or defeat, to stand together with China’s basketball team.”

Humbling. That’s the word to describe this game — and tournament — for Chinese basketball. We’ll see if they come back stronger.