Although the first site of conflict was urban Uyghur schools, the extension of the railroad to Hotan has brought with it the “leap-frog development” of brand-new schools staffed by Mandarin-speaking teachers; in some cases the signs which accompany this “opening up of the West” were written in Chinese rather than the legally-required Uyghur script of the Uyghur Autonomous Region. These schools are popping up in the desert towns of Southern Xinjiang as tokens of the “sister-city” relationships established around conference tables in Ürümchi following the trauma of the 2009. The sister cities build kindergartens and schools. They name them Beijing Kindergarten; Beijing elementary school; Beijing middle-high school; and leave their signs there as a permanent mark in Uyghur communities. In protest of the erasure of Uyghur-language signs at a Beijing middle-high school in Hotan, earlier this year Uyghur students – at great risk to their well-being – walked out and staged a schoolyard sit-in. Uyghur signs were promised.

Tsinghua University professor Wang Hui has described the atmosphere of Western China as being in the midst of a “cultural crisis” which accompanies rapid lifestyle changes. For Uyghur children, growing up in the midst of this revisioning, the songs they sing, the clothes they wear, and the stories they tell often feel explicitly inscribed with particular cultural values and tastes.

One of the Uyghurs’ brightest lights, the child star Berna, is a particularly good example of the emergence of Uyghur desires.

Berna is a trilingual seven-year-old from the urban upper-classes of Ürümchi; yet despite the opportunities laid out before her it is clear that her Uyghur subjectivity is most important for her (and her parents). When China Central TV interviewers ask her who her favorite singer is, she says to the bewilderment of non-Uyghur listeners: “Ablajan – he’s a great singer.”

In 2013 Ablajan, who I discussed previously as a Justin Beiber-like figure in the Uyghur soundscape, was one of the first Uyghur singers to compose a new Uyghur alphabet song. His song is short and relatively generic.1 Adding her voice to the successful use of this pedagogical tool, Berna (along with the young adult pop-star Gulmire Tugun)  has enlisted her voice to another song which encourages children to engage in what Gayatri Spivak would call the “deep language learning” necessary to bring forward an indigenous epistemology. Following the lyrics (below), I will discuss the cultural values modeled by Berna and her Uyghur tutor Gulmire.

Give, give, take and give (1)
Take your pen and write (bar) it for me
Draw it like a red flower
Da de Spell it for me. (2)
Sing a lullaby and cradle it for me.
Stretch it, break it (in) for me
Yes, Yes, Yes
Che in Chai (tea), Sh in sham (candle)
In this pattern D in Dan (grain)
Y in Ay (moon) N in Nan (bread) it is time to conjugate M (3)
What happened, what happened
In syllable of A there is a full moon.
The moon is full the sun gave birth (4)
Now they have become one.
Ba, Ba, bring it for me
Bring the alphabet for me
If you take it from the people give it back to the people
Give it back to the people who love it
Give the language to the people who love it (5)
Purchase it again for me, buy an Alphabet for me. (6)
With knowledge (of Uyghur) prosper for me
Rise and soar for me.
(Dance breakdown)
(Arabic order) Ilp, ba, ta, sa
If my mother gives me five cents
If the candy comes by itself
Yes Yes Yes Yes (Repeats) 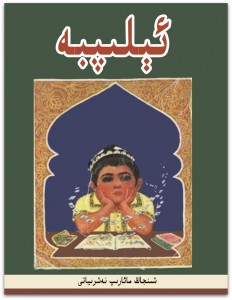 As one Uyghur listener put it, Berna’s alphabet song is even “more urgent” than Ablajan’s song. It is more about “teaching the language” than learning proficiency. (1) Gulmire begins by mimicking the language game played by a Uyghur language instructor and young children using the word Elip-be or Alpha-bet. This word originally comes from combining the first two letters of Arabic. Just as the word “alphabet” is the combination of “alpha” and “beta.” In Uyghur, if you take these initial letters apart they mean “to take” and “to give.” (2) She follows this dialogue by moving directly into the way the spelling of Uyghur letters is taught – by combining consonants with common vowels. (3) Next she begins to hint at the intricacies of Uyghur grammar by describing the way an “M” must be added to nouns in order to transform them into the first-person possessive case. (4) Turning then to the deep importance of the language, she relates these simple words to the famous 11th-century Uyghur book of enlightenment, “Wisdom that Brings Happiness,” written by the famous Uyghur scholar Yusūf Khāṣṣ Ḥājib for the prince of Kashgar. Since two of the main characters of this largely secular book of philosophy (a precursor to Western Renaissance texts) were the vizier Aytoldi (Full Moon) and the king Kuntoghdi (Rising Sun) — who stood for fortune and justice, respectively — Berna has embedded a moral lesson within the lyric. (5) Berna then makes a distinction between a language learned out of utility and a language learned out of love for a social collective. She tells us that if something is taken from the people, then the void must be made up by those who live despite this lack. (6) Finally, and most importantly, she invokes a feeling of melancholy, a feeling which precedes the loss of a barred object, with the line: “Purchase it again for me, buy an Alphabet for me.” Here she is referring to a book which is known and loved by a generation of Uyghurs born in the Dengist Reform era: the textbook known simply as Alphabet (Elipbe). The sight of the familiar green cover illustrated with an image of a young Uyghur boy with hands on his chin, lost in thought in the garden of the imagination, fills many Uyghurs of this generation with feelings of nostalgia. Many young parents can recite from memory the opening lines of the first dialogue: “One day Guljam came home from school and he proudly said…” Or Dialogue II, where their political education began in earnest: “Beijing is the capital city of our motherland China…”

Berna and her minders are extremely adept sounding boards for Uyghur desires. Although to non-Uyghur listeners this song sounds like a typical early-education ditty, for Uyghur listeners “Learning the Alphabet” implies that the tutor-student relationship modeled by Gulmire and Berna is one of the only measures Uyghur people in the city can adopt to preserve their language and culture. Unlike for previous generations of Uyghur children, Uyghur is no longer taught in many urban public schools until the third grade; and even then it is treated as a second or foreign language. In the words of one Uyghur, “Some people might say, ‘Oh, she is probably just reviewing or doing homework with the help of a tutor.’ But from the context of the song, the page of the alphabet they show in the beginning of the video, it is definitely not a repetition of something she learned at school.”

Berna and Gulmire are expressing a longing for what is not yet lost. Their song is pitched to the response they evoke in young parents as much as their assumed target audience is Uyghur children. Unlike the three Xiaos I wrote about a couple of weeks ago, bright lights like Berna inspire the sort of optimism necessary to make the risks of contemporary life in Northwest China bearable.

Next week I will discuss the way Uyghur language and cultural politics are a deeply historical part of the Uyghur ethos and how they find a manifestation in another of Berna’s performances.

1 Lyrics for that song sung with the child singers Sheringul Metqasim and Sherinay Ghulam are as follows: “Let’s start. Come on over let’s study alphabet. Let’s acquire the mother tongue thoroughly. Everybody in this mother tongue, in this beautiful language, let’s speak freely and fluently. Yes! Please start! 8 vowels, 24 consonants, what a beautiful mother tongue! Study it well, know it well.”

5 Responses to “Dispatches From Xinjiang: Uyghur Memories And Berna, A 7-Year-Old Pop Star From Ürümchi (Part 1)”

Leave a Reply to Tom F