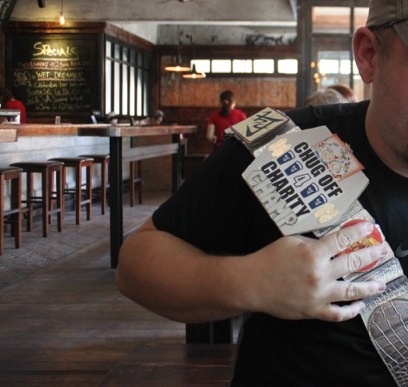 Enjoy Japandroids, everyone. Hope to see you at Chug-Off for Charity tomorrow. Links time.

Your China-related longread of the day. “One more obstacle awaited Li that afternoon. Walking into the press room in her sleek white sweatsuit, she looked warily at the assembled Chinese reporters. Her smile was pinched. China’s state-run media, which happily extols her victories for bringing glory to the motherland, had recently intensified its attacks on her streak of individualism, which has grown only stronger since she left the Chinese sports system in 2008. The furor began after her collapse at the French Open a month earlier, when a reporter for the government’s Xinhua news agency asked her to explain her disappointing result to her nation’s fans. ‘I lost a match and that’s it,’ Li snapped. ‘Do I need to get on my knees and kowtow to them?’ Her comment ignited a round of official criticism, rebuking her lack of patriotism and manners. Now, the very same reporter raised his hand to ask Li, once again, to address her fans. She glared at him for almost a full minute before mumbling, ‘I say, “Thank you, fans.”’” (Brook Larmer, NY Times)

Bo Xilai’s son gives statement. The other son. Here’s NYT’s intro of it: “On Thursday, Li Wangzhi, the elder son of the purged Chinese official Bo Xilai, attended the opening session of Mr. Bo’s trial on charges of corruption, bribe-taking and abuse of power. It was the first time Mr. Li, a son to Mr. Bo from his first marriage, had seen his father in several years. Mr. Li released the following statement after the proceedings.” (NY Times)

Bad. “The victim of the high-profile gang rape case implicating Li Tianyi, son of two famous military tenors, has come to life after an abrupt coma on August 21 night and is expected to be transferred to a hospital with stronger mental disease expertise for further treatment.” (Sina)

Yes to this. “Traffic in Beijing has worsened in the first six months of this year, prompting the government to consider launching a new program that charges drivers extra congestion fees, the Beijing Times reported. // Wen Huimin, deputy director of the Beijing Transportation Research Center, said during an interview with the Beijing government’s official website on Tuesday that the traffic congestion index (TCI) has risen to 5.0, 6.4 percent higher than the data from last year.” (Global Times)

Hmm. “Wikipedia China editor Huang Zhisong has told Radio Free Asia (RFA) that authorities have banned him from leaving China until 2016. He believes the blockade has been put in place to put pressure on him, and stems from his frequent trips to Hong Kong, Macau, and Taiwan on Wikipedia editorial issues.” (Tech in Asia)

Sigh. “A Chinese bus driver angry over being punished by his company drove a bus into a pack of bicyclists and motorcyclists on Wednesday, injuring 27 people, the official Xinhua News Agency said. // The bus driver – identified only by his surname Li – had been fined 200 yuan ($32) by his company for exceeding the speed limit in July and put on leave after he refused to write a self-criticism letter, Xinhua said.” (AP)

Hm. “A post-90 mother in Foshan gave away her 5 month-old baby believing that it was bringing bad luck to her husband’s business. She then created a fake kidnapping case but police in Nanhai District figured out what she was up to and had the baby returned on August 19, Guangzhou Daily reported.” (The Nanfang)

A man carrying an explosive device has reportedly hijacked a bus, with several children on board, near a Chengdu govt building.

Farewell to Karl Long of Paddy’s, Great Leap. (the Beijinger)

Belated, but… yikes: “Ecuador Stops Protecting Its Rainforest—to Pay Off Debt to China.” (The Atlantic)

“30-Year Throwback: What Fodor’s Was Saying About China Three Decades Ago.” (Asia Society)

“Watch: Man refuses to apologise after his son pisses on woman on Shanghai Metro.” (Shanghaiist)