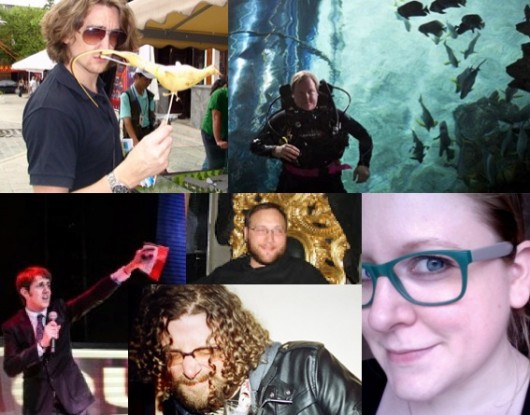 In a perfect world, no result of any chug-off would ever be disputed.

This is not that perfect world.

Please meet the judges of Chug-Off for Charity.

You have questions, we have answers.

Actually, only a panel of three will referee each race. We’ll dip out of a pool of six to ensure (hopefully) we’ll always get three who aren’t acquainted with the contestants.

Who are these people?

Why is there a 5-to-1 ratio of male to female judges?

We can’t have the entire panel be City Weekend editors, now can we?

Why have you agreed to be a judge for our chug off tournament?

Natalie: It combines two of my favorite things: beer and judging people.

Morgan: I never turn down the opportunity to judge people, especially in a public setting.

Tyler: Because charity is a thing that people do, apparently.

Schwank: I love getting free stuff from Carl Setzer. I will get free stuff, won’t I?

Wilks: Has everyone else done a joke about mishearing it as a tug-off tournament? If not: that. If so: in order to show up the other magazine eds with my superior, sparkling wit.

Of your fellow judges, who do you think you’d most likely be able to beat in a chug-off, and why?

Morgan: All of them. Any time. Any place. Especially if the medium is shame.

RFH: Wikinson I can probably take. I am only saying that just because I know it will enrage him, and anger is the enemy of good judgement (and, perforce, chugging). The others I have no idea. Tyler Roney looks he chugs all his beer anyway, just as SOP.

Wilks: Rob – I’d point out a beautiful woman at the other side of the room, and while he metamorphosed into a cartoon of a lascivious Englishman I’d pour my beer in a pot plant.

If you could chug off against any person from history, who would it be?

Natalie: Hemingway. He’d probably already be too drunk to notice me casually sipping.

Tyler: Isaac Asimov. A genius, one of my favorite writers, and it’s a sure thing because he was famously a lightweight.

Morgan: Fuck, man. Einstein. Jesus. Elvis. Oprah. Whatever. How many of these do you got?

RFH: You’re putting me on the spot here. I’m going to say the first name that pops into my head. Harriet Tubman.

Tyler: It sounds dumb, so, probably. What do you expect from people who spell “honor” and “theater” like Frenchmen. True.

Natalie: I’m not sure, but I recently learned that “growler” is British slang for something else inappropriate when I asked a British friend if he wanted to see a photo of my growler.

RFH: I’d say that was likely bullshit, otherwise those US frat parties would be even more homoerotic than they already are.

How would you assess your judging style? Firm and decisive? Supple and forgiving? Leisurely and corrupt?

Natalie: Open to persuasion by means of voluntary gifts.

What is your favorite beer… to chug?

Natalie: I guess Yanjing is probably the closest to water…

Tyler: Killian’s Irish Red. It’s spicy amber lager, and, if you drink enough of it, it makes you sing all the words to “Devil went down to Georgia.”

Schwank: Yanjing, because it’s not worth drinking any other way.

What is your favorite expat magazine?

Schwank: The Beijinger. They give me money every month.

To wipe my ass with.

And for finding out about interesting new restaurants and cultural events.

*Puts sunglasses back on*

Right before using them to wipe my ass.

Who at your magazine’s office is the best chugger?

Wilks: Jared, our nightlife editor. I’m just assuming that because he’s that kind of guy – I’ve never actually challenged him. Christ, what are lunchtimes like in the Beijing Cream offices?

Tyler: Carlos Ottery. Apparently, he won at one of a Beijinger chug event. But, we also get a lot of interns, and their livers haven’t shriveled up to look like torn garbage bags yet, so they might win.

Morgan: Umm… there’s two of us. I think Josh would win. He seems to like beer quite a bit and I’m more of a vodka and pilates kind of guy.

What’s the best part about being an editor at your particular magazine?

Morgan: It’s so hard to choose just one thing, but this moment right now is a definite highlight.

Wilks: My air of unbearable smugness and self-deluded conceit is actually earned.

Tyler: We have a mini-fridge.

Schwank: Being invited to fun community events like this one.

What do you know about Magic Hospital?

Natalie: Anyone who attempts to infuse a hospital with magic is ok in my book. Kids (and really, all humans) heal better when they’re laughing.

Wilks: Is this where I give you the code word and you sell me drugs?

RFH: It’s where kids go after a visit to Magic Pub?

Schwank: My friend Richard Robinson has been involved with them for a while. If my understanding that they do medical work with kids is correct, then I like them a lot and hope I can help.

Please think up your own question, then answer it.

Morgan: Q. Why does a chugging contest need judges? Wouldn’t the guy who finishes the beer first be the obvious winner?

A. That’s a very good question, Morgan. I can’t answer that.

Tyler: What are the galactic coordinates for Gallifrey? 10-0-11-00 by 02 from galactic zero center.

Schwank: When will your long-awaited book about your discovery of a British submarine lost in China be published? Thanks for asking, Anthony. “Poseidon: China’s Secret Salvage of Britain’s Lost Submarine” will be published in October by Hong Kong University Press. It will be available in Beijing and from fine online booksellers.

Wilks: “Fucking hell, this Q&A’s turned into a bit of a busman’s holiday, hasn’t it?” “Yes, it has – how astute of you, James… and may I say you look great this evening?” “Shhh, he didn’t say two questions.” “Oooh, get her!”

What will it take to win the 2013 Chug-Off for Charity?

Wilks: Gills / the eye of the tiger and the throat of the hippo / a garden hose and funnel / hongbao envelopes for the less scrupulous judges / all of the above.

Morgan: Being the fastest at finishing your beer seems to be the one sure-fire path to victory. Good luck, everyone!

Chug-Off for Charity is this Saturday, August 24, at the new Great Leap Taproom (12 Xinzhong St.), starting at 2 pm. There are still a limited number of spots available for contestants (150 rmb / team). Email tao@beijingcream.com to register.

2 Responses to “Introducing: The Judges Of Chug-Off For Charity”