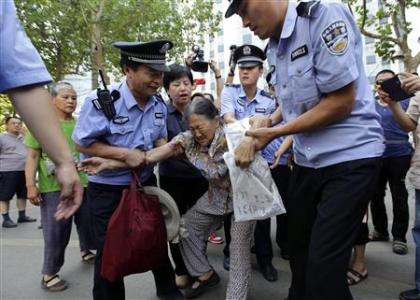 Demonstrations in front of Jinan courtroom in Shandong province, where Bo Xilai will stand trial tomorrow, via Reuters

Prepare to hear a lot about Bo Xilai tomorrow, since apparently EVERYONE IS THERE. Links time.

“Han Feizi on why Xi Jinping must destroy Bo Xilai.” “And that brings to mind Han Feizi (here is a nice pdf of an introduction to his thought), the man who helped invent the very notion of ‘rule by law.’ Han would very much agree that Bo should be punished ‘according to the law’ and done so in a highly public manner, to serve as an example to all, politically high and law, that transgressions will be dealt with severely. Indeed, the primary reason to establish a system of rule by law is precisely to obstruct the political potential of people like Bo and preserve the power of the current ruler. That’s what makes Legalism so useful to Chinese rulers across the centuries: it speaks directly to their interest in maintaining power.” (The Useless Tree)

On WeChat and censorship. “But whenever China’s closely-monitored ‘Innernet’ is plugged into the global computer network, the question of censorship rears its ugly head. While it harbors world-domination ambitions for WeChat, Tencent, the Chinese tech giant behind WeChat, has appeared to enact censorship measures to placate the Chinese authorities, who have a knee-jerk aversion to any information not under their control and therefore built the notorious Great Fire Wall, a sophisticated state apparatus that filters out unwanted ‘noises’ and blocks ‘vermin websites.’ // In fact, at home, WeChat has toed the party line. And it is far more intrusive than banning the use of a few sensitive words.” (Tea Leaf Nation)

Another rejection. “A Chinese court on Friday rejected an appeal by the brother-in-law of jailed Nobel Peace Prize laureate Liu Xiaobo, upholding his 11-year sentence on fraud charges, a case seen as another example of official retribution on the Liu family.” (Reuters)

Oh, that’s good. “Although our southern rivals Shanghai and Shenzhen regularly vie for the title of the Chinese city with the greatest per capita income, Beijing can lay claim to a different crown: having the highest number of wealthy people of any city in the country.” (the Beijinger)

Metallica, reviewed. “I’ve been going to shows for the most part of 2 decades now with only a few bands missing a checkbox in my bucket list. Even bands i never thought i’d see back in 196 when said bucket list was made have check mark next to their name: Motley Crue reunited, Concrete Blonde got it back together. Pantera came around Toledo,OH back in the days before the splits and the death… the list goes on. Metallica managed to evade me until this year! As soon as they signed up for Shanghai, there was absolutely no fucking way in hell i would miss that show. And I’m glad i didn’t.” (Beijing Daze)

Twitter and Facebook unblocked in some five-star hotels – story originally on SCMP, no longer available for some reason. “Chinese authorities have lifted firewall controls on Facebook, Twitter, and other foreign social networks, but only in places like 5-star hotels frequented by international businessmen. Users reported that they could easily login to blocked websites while connected to lobby Wi-fi at high-scale hotels in Shanghai, Beijing, and other foreigner-heavy Chinese cities.” (Shanghaiist)

Interesting. “Deep in China’s spirit world, an inflation crisis is brewing that would give central bankers chills. // For hundreds of years, Chinese have burned stacks of so-called ‘ghost money’ for their ancestors to help ensure their comfort in the afterlife. The fake bills resemble a gaudier version of Monopoly money, emblazoned with the beatific-looking image of the Emperor of the Underworld.” (WSJ)

Limp Bizkit at Sonic Shanghai doing “Killing in the Name Of” interlude, via Smart Shanghai:

The cheapest visa run from Beijing may be to North Korea. (That’s Beijing)

“Mo Yan in Foshan for literary festival.” (The Nanfang)

“Naked Ambition: the Beijing premiere of ‘I Am a Nude Model’” — featuring Jonathan Kos-Read. (That’s Beijing)

“After 4 years of veggie stealing, Renren shuts down ‘Happy Farm.’” (Tech in Asia)

Via The Nanfang: “A rooftop temple on top of Meijia Square housing complex in Shenzhen’s Nanshan District has become the latest in a series of controversial rooftop structures in China.” 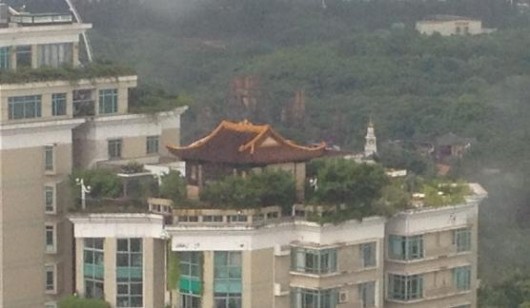