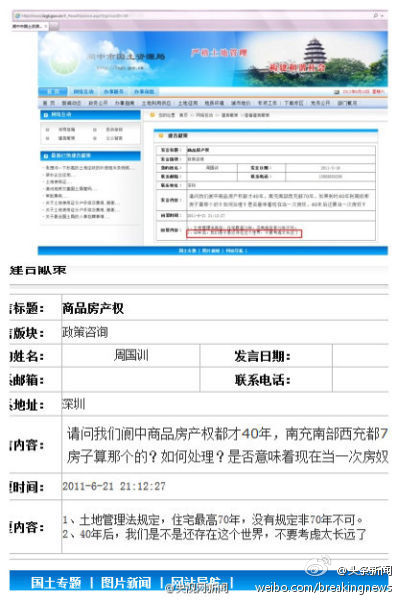 While the central government technically owns all land in China, it’s standard practice to issue long-term leases of up to 70 years to would-be residential property owners. Certain restrictions apply, but land grant contracts are usually 70 years, and that’s that.

One particular land and resources bureau, however, apparently missed that memo about “70 years.” Either that or it felt properly high and mighty as to openly flaunt a purposefully wrong interpretation of Chinese property law.

in Liangzhou, Sichuan province back in June 2011, a netizen noticed that his city’s land use right only granted 40 years, not 70, as in neighboring counties. (While this happened two years ago, this story was only recently reported on by Chinese media, and brought to our attention by Hug China.) The netizen raised a very reasonable question on the Liangzhong Bureau of Land and Resources website, basically: What gives?

1. Land laws stipulate that land usage rights can be up to 70 years, but it doesn’t necessarily have to be 70 years.

We’d be curious to know what officials in Beijing think of this interpretation. Liangzhou shrugs at national regulations because it thinks it can just make its own. Hmm, that’ll go over well.

Reason No. 2 is the more ridiculous of the two though:

2. After 40 years, will we still be here in this world? Don’t think too long-term.

This display of bureaucratic impudence — an attempt at snark that actually just makes this Liangzhou bureau look like a massive dick — was quickly derided by netizens as “God’s reply.” Hug in China has translated a sampling of messages on Sina Weibo:

@_NJ亚亚: Let it be! There is nothing left for us to keep long term since air was regarded as public property in the Heavenly Dynasty.

@敲键盘大师兄：The official tells the truth. He does not know either whether the darling party state will still exist after 40 years.

@有饭大师：Eh, it is difficult to say whether your party can survive another 40 years.

@诚橙数码V：Property right is reduced by half, how about the property price?

The mockery is obvious, as is the cynicism. “Will the Chinese Communist Party still be around in 40 years?” isn’t a joke that goes over well with Internet censors, but they have to tolerate it because an agency in some Sichuan city decided to be cute.

Your move, Liangzhou. Rectify this.

“Officials of Bureau of Liangzhong Land & Resources updated the post on Sunday and apologized for the ‘inappropriate wording,’” Hug in China reports.

Maybe they got the memo after all — a late one, faxed in by a higher office, telling everyone to get their shit together.