Here’s the WSJ’s Chinese site, now only accessible with a VPN inside China. 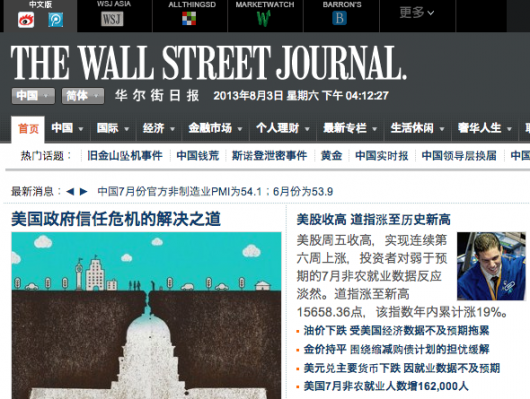 WSJ’s Chinese site is edited by Li Yuan, who can be found on Twitter (she hasn’t tweeted since August 2). Shanghaiist points out that her Sina Weibo remains active (as does WSJ Chinese’s Sina Weibo account), and on Saturday at 11:06 pm, Li reposted the following on Sina Weibo, first written that day at 9:05 pm by real estate tycoon Ren Zhiqiang:

You can disagree with some opinions, you can use force to shut down some media outlets, you can also use legitimate methods to delete some comments. But you cannot use ignorant and shameless articles to fool people’s knowledge, use the official media’s power and status to trample upon people’s dignity, or use rumors and deceptive methods to insult them …

(Translation by Shanghaiist. Li prefaced the repost with the line, “Challenge the bottom line.”)