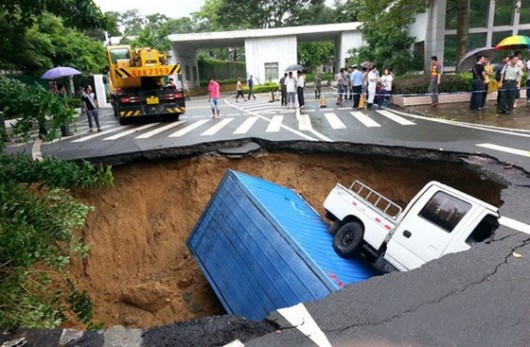 Another sinkhole in Shenzhen, via Hug China

This is the week for our little chugging tournament on Saturday. There are two slots available for teams that want to participate. Remember, we’re basically paying you to do this (assuming you use Sherpa’s), so get in on the action. Then read these links.

A lot of coins. “August 15th, the Kunming city downtown branch of Industrial and Commercial Bank of China processing a deposit for Ms. Wu. The 8 bags of 1 jiao [10 cent] coins Ms. Wu brought totaled 10,000 yuan, taking 18 bank employees working from 9am till 6pm to process only over 5000 yuan of it. Ms. Wu says this was the compensation delivered to her by the person who had assaulted her after she and her husband won the lawsuit.” (chinaSMACK)

Even when chengguan do something right, they do it wrong. “Rather than dealing with rooftop villa owner Zhang Biqing in the same manner that their counterparts in Hunan addressed the problems caused by the melon seller Deng Jiazheng, the Haidian district chengguan first phoned Zhang to tell him that his illegal building posed a serious threat to public security and also represented a dangerous fire hazard.” (Danwei)

Try it at your local bar? “A Guangzhou man purporting to be a Taoist priest defrauded a woman of 20,000 yuan after convincing her to have sex with him to ‘exorcise demons,’ Shenzhen Media Group reports. // According to Haizhu district police, on July 23 a man, surnamed Huang, visited a feng shui store and struck up a conversation with the sales assistant Xin (pseudonym). After a brief display of what sounds like basic cold-reading, Huang convinced Xin that he had supernatural powers and told her he was a ‘Master Dragon Seeker.’ Huang also introduced Xin to his female disciple, Youxin, a ‘female geomancer.’” (Shanghaiist)

Forger. “The New York Times is doing an excellent job of mapping the entire story of the fraudulent American Modern works that were sold by Glafira Rosales. Today a team of reporters identified the man who made the paintings, Pei-Shen Qian, a 73-year-old Chinese artist who fled to the US after the Cultural Revolution” (Art Market Monitor)

A pic showing maybe 5% of the mobbed floor at the Shanghai Book Fair today. Who says Chinese don't read? pic.twitter.com/QXeMExpNML

The sky is angry in Shanghai. http://t.co/p7SdCbD6Q4

More on the hacking of the Central Tibetan Administration. (Shanghaiist)

Tomb robbers suffocate, which is kind of fitting, though awful. (China Daily)

TimeOut Beijing interviewed us about Chug-Off for Charity. (TimeOut) 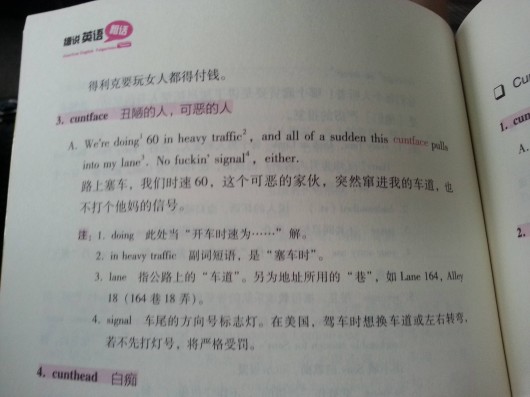