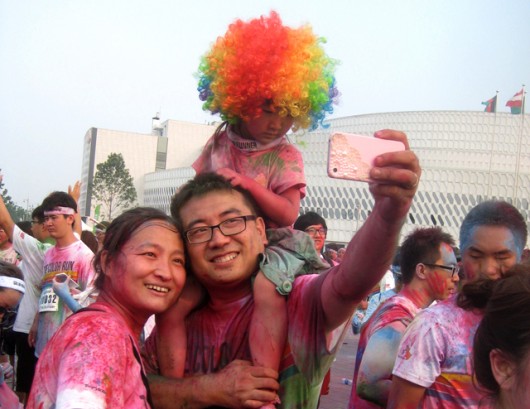 Hope you guys have rubbed off all that red dye. Why is it always the red links?

The boy of privileged now fighting a gang-rape charge. “What happened in the room itself is perhaps all too easy to picture: Yang refused to undress but surrendered eventually after suffering more violence from the boys. Li took the lead in having sex with her, followed by Wang and the others. Unsurprisingly, none of the gang used condoms. // …Yang later revealed her experience to Zhang the club manager, who tried in vain several times to contact Li Tianyi and his PLA general father, hoping to ‘fix a deal’. The junior Li claimed it was prostitution, not rape, while his Li senior simply chose to ignore Zhang’s calls and messages. // Fortunately for Yang, the police proved to be somewhat less incredulous.” (Valentina Luo, That’s Beijing)

The review of Han Han we’ve been waiting for. “A dozen years later, Han Han’s core set of readers, members of the so-called ‘’80s generation’ (children born in that decade), have left school, where they unhappily toiled for years, and have plunged into a rapidly changing society where fresh challenges await.  Youth from rural areas swarm into cities in search for wealth and opportunity, only to stumble onto a spectrum of social barriers and a widening income gap; children of middle class families graduate from universities with high hopes, but find themselves facing a dismal job market; the large number of Chinese youth who have chosen to study abroad gain new perspectives from their experiences, but struggle to reconcile new ideas with beliefs instilled by Chinese education.” (Helen Gao, LA Review of Books)

Note: this reportedly happened at the Friday Cirque du Soleil show in Beijing, but the Saturday and Sunday shows went on as planned, so maybe it wasn’t that big a deal. “A tipster informs us that during a performance of ‘Michael Jackson: Immortal’ at the Wukesong MasterCard arena the ‘Tank Man’ photo was displayed on a giant screen in front of a crowd of around 15,000 people. // ‘This was not some politically-sensitive rock concert, but the opening night of Cirque du Soleil’s Michael Jackson ‘The Immortal’ world tour, where during the climax of the track “They Don’t Care About Us” the image appeared momentarily for a total of about four seconds within a montage sequence of civil-rights style protest movements, resulting in an audible collective gasp from the audience.’” (Shanghaiist)

Knife attack in Hangzhou. “A man wielding two knives injured eight people yesterday morning in Hangzhou, capital of eastern Zhejiang Province. // The 33-year-old, surnamed Liu, attacked one neighbor with two knives and then, while chasing other neighbors, wounded five people on the street at about 8:30am, said the Hangzhou municipal public security bureau.” (Sina)

A reading law. “Roughly a month after passing a law requiring adults to regularly visit their elderly parents, Chinese policy makers are considering legislation to encourage another activity the country’s people have neglected: reading. // The General Administration of Press, Publication, Radio, Film and Television announced that it had drawn up the first draft of a new Regulation on Public Reading Promotion, which it planned to submit to the country’s cabinet, the State Council, for approval by the end of the year.” (WSJ)

People remain unhappy about Galaxy SOHO. “A Beijing heritage group says it’s still waiting for the Royal Institute of British Architects to explain why it gave a large, futuristic mall and office complex in the heart of old Beijing one of its most prestigious honours. // The award for architect Zaha Hadid’s Galaxy Soho would only make preserving the capital’s historic structures more difficult, according to the Beijing Cultural Heritage Protection Centre. // The non-governmental organisation sent an open letter more than one month ago to the institute, protesting its decision to honour the structure.” (SCMP)

Big bust! ” Beijing police said Saturday they have detained 299 people in a fraud case, where they use personal information illegally acquired to falsify certificates and sell collectible items at high prices after repackaging them.” (Xinhua)