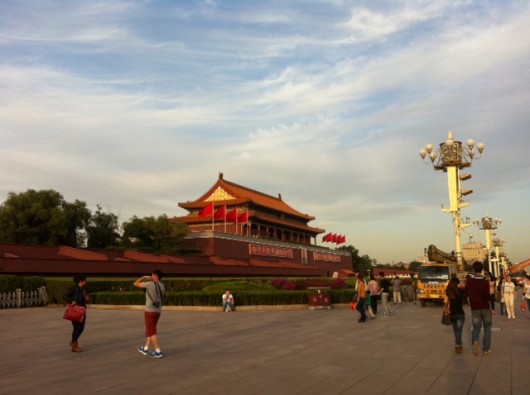 Tourists are expected to flock to Tiananmen this week during National Day holiday. Here’s a reminder that the gate you see isn’t exactly the gate of history.

Every year, millions of Chinese and foreign tourists swarm the country’s national symbol, the Gate of Heavenly Peace — Tiananmen. But few know that the current gate is actually an imitation that was only built 43 years ago.

Tiananmen has actually been rebuilt several times. The original was constructed in 1420 during the Ming Dynasty. A lightning strike in July 1457 burned it down, and it was rebuilt in 1465. In 1644, the gate was burned down again, this time by rebels led by Li Zicheng. Following the establishment of the Qing Dynasty, the gate was once again rebuilt in 1651.

More than 300 years later, Tiananmen Gate was torn down, as Shanghai-based Liberation Daily reminds us. As authorities were doing this, they put tarps around the structure and said it was undergoing “renovations.”

The complete demolition and rebuilding of Tiananmen was considered a top political secret until the 21st century. Liberation Daily:

The gate had badly deteriorated due to centuries of war, fire, dilapidation, and lack of repair. The main structure had been deformed and the base of the gate showed serious sedimentation. The 7.5-magnitude Xingtai earthquake in Hebei province in 1969 caused further devastating damage to the gate.

For safety reasons, the Chinese State Council decided in 1969 to completely demolish the gate and rebuild it at the same place, the same size, but with modern materials.

The Tiananmen Gate Security Team (TGST) drafted three plans for top leaders to choose from. The TGST preferred the first plan, which was to retain much of the wooden frame while replacing other parts with first-grade wood.

The second plan was to retain the base, the front red wall, while replacing everything else with modern concrete and iron. The third plan was to completely demolish the old gate and replace it with a brand new one with concrete and steel.

As the gate was a national symbol, the State Council ordered that the rebuilding was to be kept top-secret. The gate was covered in scaffolding, and the project was officially called a “renovation.”

To keep such an important project a secret in China’s political center, where tens of thousands of tourists visit every year, was actually easy for the leadership…. Even workers in nearby Zhongshan Park’s Nationalities Cultural Palace didn’t know what was happening inside the tightly closed scaffolding.

All workers who participated in the rebuilding of Tiananmen Gate were ordered to stay silent, and couldn’t tell anyone, including family members, since it was political.

The rebuilding started on December 15, 1969. The new Tiananmen was reopened to the public on May 1, 1970. Workers were picked among the country’s top technicians.

The demolition of the gate took only seven days.

What you may not know: current Tiananmen Gate is a fake… (Hug China)