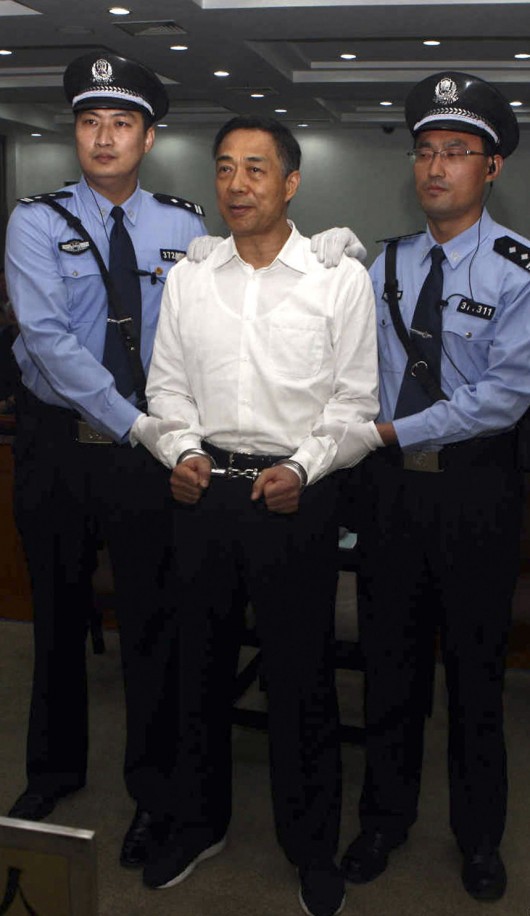 The foregone verdict is official. CNN:

Bo received the life sentence for bribe-taking, as well as 15 years for embezzlement and seven years for abuse of power.

The 64-year-old Bo Xilai, almost grinning in the above pic, perhaps fashions himself as a political martyr.

Days before the court announced the date for delivering the verdict, Bo reiterated his innocence but said he anticipated a lengthy imprisonment in a letter written to his family.

“I was dragged into this and really wronged, but the truth will come out one day,” wrote Bo in a letter dated September 12, referring to the bribes allegedly taken by his wife and other scandals involving her and her friends.

“Meanwhile I will be waiting quietly in prison,” Bo continued. “Dad was thrown into prison multiple times in his lifetime and I will look up to him as my role model.”

He’s not a martyr, of course. He’s just a Chinese politician who committed the mortal sin of flying too close to the sun, and will now find his name relegated to the footnotes of his country’s textbooks. It seems unlikely that anyone will care about him in a year’s time, and that, instead of any jail sentence (to be served inside the “luxurious” Qincheng Prison in outer Beijing), may be the cruelest punishment.

Enjoy the rest of your Sunday evening.

But before being forcibly taken away by the court’s guards, Bo shouted: “The decision was not based on facts. The court is neither open nor just and didn’t take the points made by my defence lawyers and me.”