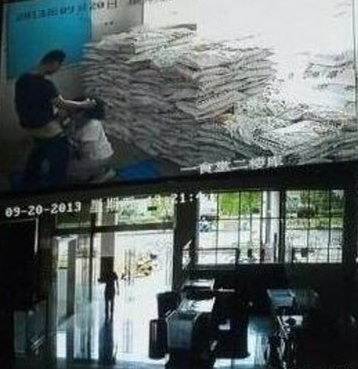 “University Cafeteria Workers Caught Having Sex in Storeroom” via chinaSMACK

Website censorship lifted in certain parts of Shanghai. “Beijing has made the landmark decision to lift a ban on internet access within the Shanghai Free-trade Zone to foreign websites considered politically sensitive by the Chinese government, including Facebook, Twitter and newspaper website The New York Times.” (SCMP)

Orville Schell on Bo Xilai’s sentence. “Asked to comment on the significance of Bo’s sentencing, Schell explains that the case was ‘sublimely embarrassing’ for China’s ruling elite, both because it exposed the inner workings, or ‘deep recesses behind the veil of high party politics’ and because Bo’s father, Bo Yibo, was one of the revered ‘eight elders’ who helped Deng Xiaoping steer China toward a market economy in the decades immediately following Mao’s death.” (Asia Society)

Editorial. “The following piece, written by CMP fellow and former Southern Weekly journalist Xiao Shu (笑蜀), was published in the most recent edition of Hong Kong’s Yazhou Zhoukan. In his latest appeal against the criminal detention of prominent venture capitalist Wang Gongquan, a leader of the New Citizens Movement, Xiao argues that Wang’s detention concerns the rights and dignity of every Chinese person. ‘Will the Chinese people forever be mired in barbarism?’ he asks.” (China Media Project)

China buys 5 percent of Ukraine? “Ukraine’s KSG Agro released a statement today, Sept. 24, denying reports that it had reached an agreement to sell 3 million hectares to a Chinese firm. Hong Kong’s South China Morning Post had reported a deal between KSG Agro and China’s Xinjiang Production and Construction Corps, (XPCC) in which China would be able to farm the area for up to 50 years. The paper cited a statement from XPCC as the source of its report.” (Quartz)

Chen Guangcheng asking Barack Obama for help. “Chinese dissident Chen Guangcheng on Tuesday accused Beijing authorities of cracking down on members of his family, calling on President Barack Obama to intervene. // Chen, who emigrated to the United States last year following his dramatic escape from house arrest, told reporters at the National Press Club in Washington that several members of his family had been harassed since he left his homeland.” (AFP)

Escape from the Mystery Room – a new craze. “According to the China Daily (whom I work for), these mystery rooms materialised in the physical world through the popularity of similarly-themed online point and click adventure games. There is a whole genre of these games which correlate with Locked Room Mystery novels. There have been a series of these games on PC. These hidden object games were so popular that it drove some people to create real life versions.” (Eric Jou, Kotaku)

This @Reuters photo of Usagi hitting China is so Gen Y. Twitpic before common sense. BTW it's killed 25 there so far pic.twitter.com/1wPYUGmOQw

Xia Junfeng to be executed today… painting by his son is getting a lot of play on Weibo today https://t.co/j3QqSd9KG9

Can Beijing air be like London’s and New York’s interlude, via Asia Society:

A nice series on the laobaixing of Beijing. (China Radio International)

“North Korea Then And Now: Inside The Hermit Kingdom, 18 Years After My Parents And Two Years Into The Reign of Kim Jong-Un.” (Michelle FlorCruz, International Business Times)

“The True Cost of Becoming an Academician.” (China Digital Times)

Chinese sex workers in the UK. (The Guardian)

The Killers in Beijing, new location. (the Beijinger)