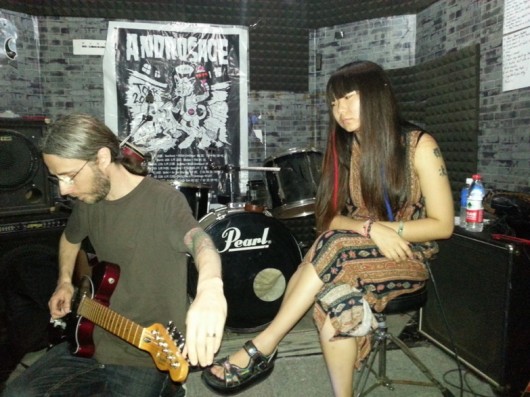 Moon, a seasoned musician who specializes in a genre of experimental music known as drone (it sounds exactly what you might suspect — a singular note or chord that is continuously sounded throughout most of a composition, a throwback to how medieval monks probably spent their frosty, dewdropped mornings), first performed within the country last year at a series of low-profile gigs in our sordid rival from the south, the City That Shall Not Be Named.

Since then, he’s has gone on to fine-tune his craft with a domestic musician named Lenz, the feral frontwoman of virulent rock outfit Goushen.

Working remotely under the name RST + Lenz, a slightly-altered brand that Moon has recorded under previously (including a full-length release on noise elder Thurston Moore’s Ecstatic Peace Records), the two have spent the past year sculpting a series of transnational compositions — Moon sends over the guitar tracks from Auckland, Lenz responds with her vocals — and will publicly debut the project in Beijing tomorrow at the bohemian-flavored music venue XP.

While Moon likens ambient and drone music to the humming of modern-day neon signs, the material with Lenz differs wildly in that its contemplative waves of textured guitars tempered by Lenz’s grounded spoken word vocals share more in common with post-rock than drone, an often inaccessible genre for the unfamiliar. The RST + Lenz compositions are instantly accessible and concertgoers will surely find that songs like “Love” conjure up cinematic-level landscape shots rather than that neon-red buzzing Maotai billboard flickering at the end of your street.

Considering the nature of the material and the intimate format of the venue, tomorrow’s gig just might be this year’s crown jewel for the city’s fans of experimental music. The fact that it was coordinated by Sick Car Sick, the apparently-dyslexic side project of a famous group of upstanding young whippersnappers who are renowned for their vomit-flared brand of rock music both in and outside of China, should make this a ringing endorsement for the undecided.

We touched base with the twosome in this debut edition of a new midweek column designed to shed a tractor beam on some of the dimmer corridors of the country’s creative community.

Tell us about your music.

The more structured music Lenz and I are doing tries to incorporate those pure “sound” elements into a song-based context and marry that with Lenz’s voice, which is really the focal point. So what you get is a sort of balance between the sounddrift hanging between notes, the guitar itself and of course THAT voice. There are influences that led me to this over the years but anything where there’s space in the music and slow tempos usually gets me going. I hear a lot about the Beijing scene being a breeding ground for experimentation and it sounds like the perfect place for Lenz and I to do our thing.

How did the China connection come about?

I’ve been coming to China for quite a while now for business. A friend in Shanghai introduced Lenz and I back when Lenz’s former band, Androsace, were active. I got involved in mixing the Androsace record which we did remotely. From there, Lenz and I began discussing working on music together.

You’ve been in the country for several weeks now…

The Shanghai shows were excellent; the bands were brilliant and a load of lovely people came out. The music scene here is thriving with all sorts of incredible stuff going on: amazing bands and people passionate about music and supportive of each other. The Sunday shows running out of [Shanghai live music venue] 696 are a good example: the lineup is always varied, so there’s different audiences coming together and connections made across scenes. What stands out is how important it is to everyone that the scene builds and develops — there’s a real emphasis on creating a foundation from which bands can grow and it’s been cool to see that.

What were your expectations prior to your arrival?

I’ve been coming here for a while now, but only more recently had the opportunity to be involved with local music. I had no idea what to expect of the music scene: I just got lucky to make a connection with people here and find out firsthand.

What was your entry point into getting involved with local music?

Mixing Lenz’s former band Androsace. While my first exposure to the underground was through an expat friend sending all sorts of douban links to bands here, the specific turning point was when I was sent the Androsace recordings, there was something raw and passionate about those amazing vocals.

I came to China shortly after and met Lenz in person for the first time. I was working on this new recording and after meeting we decided to work together. So that recording changed quite a bit and it became very much a collaboration.

What’s the plan for your Beijing downtime?

Unfortunately, I only have one night in Beijing and that’s going to involve local food, awesome local music and whatever sightseeing we can do in an evening. Hopefully, we’ll be able to hook up with the Beijing band 16 Minutes —we played with them several weeks ago and they totally blew us all away.

Thanks to everyone who’s helped organise the shows and been so welcoming and supportive: Shanghai is starting to feel like a second home. I’ve met some really lovely people so far and seen some incredible music. When it comes to RST, we’re going to focus on playing some nice shows and fine-tune what we’re doing. We don’t get together often and we’ve actually only ever had two rehearsals, so we’re making the most of being together face to face. Then it’ll be back to working remotely until the next time. And with any luck, the record should be done by then!