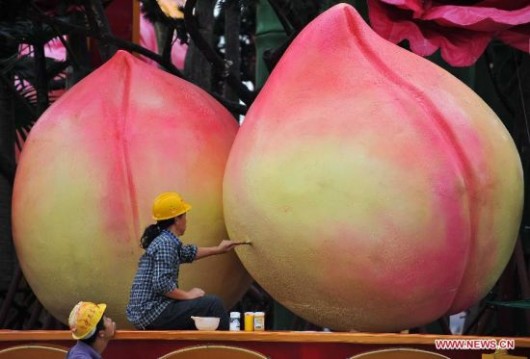 National Day is coming, via Xinhua

We’re hanging out at The Local for the Rotaract charity pub quiz tonight, which begins just a little after 8 pm (50 rmb for team up to five). Come join us if you’d prefer not to read links.

Eye gouge plus murder. “On September 21, as most families prepared to celebrate the mid-Autumn festival, one family in Yuzhou, Henan was about to experience their worst nightmare: their son, discovered stabbed to death and dumped in a pond (site where he was found pictured above), with one eye missing, according to the provincial news portal Dahe.cn. // The boy’s body was in a dreadful state, his parents told media. // ‘He was stabbed more than 100 times, almost defaced. His right cornea was missing too,’ the boy’s grief-stricken father, Liu Haiyang, told Dahe.” (That’s Beijing)

New kind of feminism. “The enthusiasm suggests an intriguing possibility: As the Chinese government strikes anew against freedom of speech, detaining even mild-mannered democracy activists, civil society advocates and popular public opinion leaders, might there be a feminist revolution in China before there is a democratic one? // In recent weeks, Lean In circles have set up in half a dozen universities in the capital, including Tsinghua University, Peking University and the Communication University of China, members said in interviews.” (NY Times)

Bonkers. “Here is the question: if your government decreed that, starting from September 16, you will work for three days then have a three-day holiday; go back to work for six days, then take a day off; work two more days followed by a seven-day holiday; then work for another five days before taking yet another day off, what would you say? Probably that your government is bonkers.” (SCMP)

Video on military training in China. “Junxun refers to the military training all Chinese university freshmen must go through when starting college. What’s intrigued me is how in many ways it seems to be a microcosm of how Chinese youth today both embrace and subconsciously resist the carrots and sticks that the Communist Party uses to keep their support.” (Sinostand)

China to build really expensive film studio. “China’s third richest man, Wang Jianlin, announced yesterday that his company, Dalian Wanda Group, was to embark on the construction of a giant film studio in Quingdao, on the country’s eastern coast. Representing an investment of 50bn yuan (£5.1bn), Wang claimed it as the most expensive studio project ever. // Named the Oriental Movie Metropolis, the facility will contain 20 sound stages, including the world’s first underwater studio, a convention and exhibition complex, a shopping mall and amusement park, and seven hotels. It will not, apparently, be a contender for the title of world’s largest: that appears to still reside with the 47-stage Ramoji Film City in Hyderabad, India, as certified by Guinness World Records.” (The Guardian)

Chinese among those killed in Nairobi attack. “A Chinese businessman confirmed to Xinhua today that his friend, a female Chinese, was killed, and her child injured in the attack at the upscale shopping mall in Kenya’s capital city Nairobi yesterday.” (Xinhua)

Yunnan zoo invites tourists to play with racoons, has one nicked a week later http://t.co/r3mp5IHIvV

Bo Xilai speaks in Chinese court after being given life sentence interlude:

“Bo Xilai Found Guilty of Corruption – A Chronicle of Censorship of the Case.” (Fei Chang Dao)

In defense of the anti-rumor campaign. (An Optimist’s Guide to China)

Essential views of Beijing, via CRI: