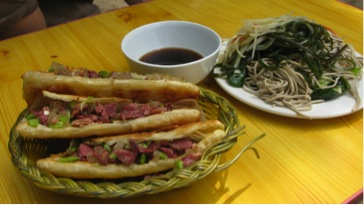 If you’ve lived near Wudaokou for more than a few months and haven’t noticed that every third person is walking around with a bag full of steaming, brown date-cake bricks, you need to step away from the five-kuai, dance-club hooch you’ve been swilling.

Same goes for if you haven’t seen the line snaking around the corner just east from the Dong Sheng building (Lotus, Nirvana Fitness) and leading to a storefront window set up a bit like an inner-city liquor store (transact through a half-moon in the bottom of the bulletproof glass, quickly and in cash). If you fumble with your wallet or are too slow at the window, the throngs behind you will almost certainly fuck you up.

During the National Day holiday I waited in a line three and half hours to take a bus towards the Great Wall. I watched as a few jerkoffs ahead of me jumped the queue and were met with quiet grumbles and fist-shaking.

Don’t try that shit in the zaogao line.

Once, I saw a well-dressed office worker type try to sneak to the front of the line as he passed on the sidewalk. It was rush hour and the line was huge. The reaction was like a Red Guard-era student rally. People erupted – screaming, cursing, and dropping their handbags, ready for a revolution. If he hadn’t walked away, I have little doubt he would have been bludgeoned into cake batter. And for good reason. The zaogao here is awesome.

Some people say waiting in line for 30 minutes isn’t worth it. They’re wrong. I don’t care if the secret ingredients are migrant sweat and Tongzhou top-soil, this stuff is a mile better than the crusty, dried-up shit that you’ll buy anywhere else in the city (and is 10 kuai for a “jin and a half” – about eight pieces).

For extra fun, give a hunk of zaogao to one of the beggars making the rounds with a limp and a tin cup (not the ones with the comatose puppies, fuck those guys), and watch his eyes light up. 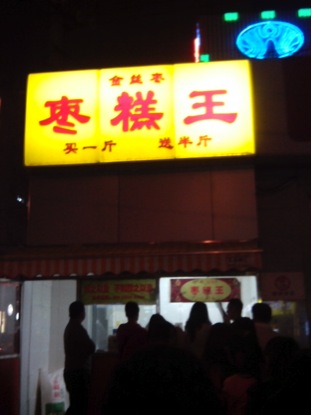 Yeah, shack. Step inside this crumbling, street-side dive just north of the 7-11 across from Tsinghua’s main gate (by the KFC) and you’ll see a poster of the main attraction: a solitary donkey happily eating grass on a rolling, green pasture under a blue sky. Presumably, that was before he was slaughtered, chopped up to bits, and squeezed into a flaky pastry. That’s what this place serves – donkey burgers – and they do it better than anywhere outside of Hebei.

First, to clear up any misunderstanding, these things are delicious. The meat is slow-boiled, seasoned perfectly, and interspersed with just the right amount of marrow and fat. The buns – crispy, thin pastries – are always freshly made and come out piping hot. It’s also dirt cheap – four kuai for a burger. Like Zaogao Wang, this place is always packed. I once saw a man driving a Mercedes SUV pull off from the highway onto the sidewalk in front of the stand and urgently shout an order from his window.

When you’re inside, no one gives a shit if you wear a shirt, shoes, or pants. During the summer months, the four or five tables are always crowded with sweaty construction workers, letting their paunches out to breathe while they smash a dozen or so burgers and some white booze.

Out back, there’s a poor-man’s patio with a couple of fold-up card tables, stools, and plastic lawn furniture. The service is reassuringly surly. If you ask for napkins, the waiter (tattooed scorpion on his hand) is just as likely to tell you to go fuck your mother as he is to throw you a fistful of toilet paper.

There are abundant cold beers and complimentary vinegary cucumbers when the waiter feels up to it. In the cooler months, when the patio is closed, the inside is cozy with steam from a barrel of perpetually simmering donkey. If you’re lucky, you catch flecks of flesh as you breathe in the wholesome goodness. PM Donkey 2.5.

Nick Compton is an American journalist living in Beijing. You can reach him at nickcompton1@gmail.com. 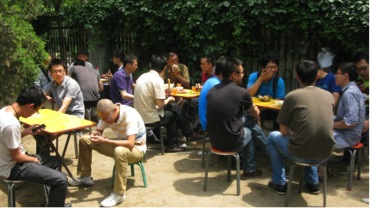