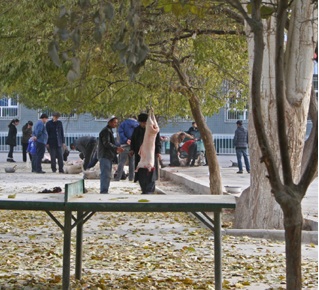 The first indication that the Qurban festival has arrived in Northwest China is the pooling of sheep outside every block of Uyghur tenements in the cities of Xinjiang. Quivering clumps of fat-tailed sheep are tied to branches as men begin sharpening knives for ritual slaughter. After the throat is cut, a small opening is made in a leg and air is blown from mouth to shank. The sheep is then hung from the nearest available beam or branch and skinned. Under ideal circumstances, every part will be used. If you can’t afford a whole sheep yourself, or you can’t be bothered with butchering it yourself, makeshift slaughterhouses at the entrance to public parks will sell you a bulging sack full of mutton to take home and roast (or at times in the Uyghur case – boil) like an American with a Butterball turkey on Thanksgiving.

This year Qurban Heyt, or Eid al-Adha, the Islamic holiday which commemorates Ibrahim’s willingness to sacrifice his son through the sacrifice of a ram, coincides with the annual turning on of the heating system in Urumchi. This long-awaited event means the end of nights bundled in layers of wool under mounds of blankets; it means the arrival of winter gloom in the form of Ürümchi’s man-made “great fogs” of soot and smog from the antiquated centralized boiler system. But the holiday, the biggest annual event on the Uyghur social calendar, also means that for four days – from October 15 to 19 – tolls will not be collected on Xinjiang toll-roads. Ürümchi Uyghurs will head home to the countryside or around the city to see friends and family.

In what follows, I will argue that while Ürümchi has some of the worst pollution in the world and the coldest winters in China, the tools of hot food and the warm conviviality of family and friends on bustling festival holidays are one of the social strategies that give Uyghurs the wherewithal of a tractable life.

1. Qurban as a social festival

For as long as people can remember, Uyghurs in Xinjiang (like Muslims around the world) have taken the opportunity presented by Qurban to organize communal visits to the homes of neighbors and relatives for feasting, gift-giving and marking another year of life. Noting the explicitly religious component which accents the emotional exuberance of these events, urban Uyghurs see this festival as an opportunity to practice forms of cultural citizenship which adapt, assert and negotiate social space as their own. The ceremony of the festival visit is tied to a familial, ethnic and political identity – but it also involves the evocation of embodied, subjective feelings of home through ritual, food and communal warmth. Gathering around a single tablecloth (Uy: hemdastijan), differences of age, wealth and education are reduced.

In traditional Uyghur courtyard homes in oasis towns and villages of Southern Xinjiang, meals were often served on a tablecloth which was placed on top of mats in the communal sleeping area of the house. This became a powerful placeholder in Uyghur host-guest culture. Honored guests were given particular positions around the tablecloth. Today, most Uyghurs in the city eat around tables, but the concept persists particularly during events like Qurban, where ceremonial guest-host culture is put in play. Even the order of entering the house is predetermined based on age. Younger people should wait for the older to enter the homes when visiting relatives while moving from home to home. But despite this hierarchy of honor, the overriding feeling remains that everyone has a place at the table.

As soon as everyone is seated, the elder, or the person who is considered most knowledgable in religious matters, says, “Amen.” Everyone else around the table then raises their hands to offer blessings on the home. This is a practice more common among Uyghurs in rural areas even during everyday guest-host relations, something not commonly observed in Ürümchi. But on Qurban, it becomes a common-sense obligation for Uyghurs no matter where they are and what their typical religious affiliation might be.

It is here that obligation toward the Uyghur city as a home-ecosystem is put into play in locations which seem at first to be out-of-place – far from the built environment of their origins. Uyghurs in Ürümchi gather around long tables covered with hand-embroidered tablecloths covered with clear plastic. They sit on wide chairs underneath handmade woven and painted depictions of famous locations in Southern Xinjiang – where even in the city nearly everyone claims a trace.

The table is laden with flat, dried rounds of bread pressed with sesame seeds (Uy: nan), dried fruits, nuts and baked sweets. Some of these are from the oases in Northwest China, some are urban iterations, placeholders of a familiar kitchen table topography. The subterranean conviviality of sharing a meal combined with ceremonial ritual asserted in reimagined urban Chinese spaces produces emotions which evoke a sense of place and rupture in the midst of the effects of the Chinese world and the homogenizing discipline of getting by. This is what rituals are for – to give people a sense of stability and rhythm. They are an important part of finding a durable existence.

For the next few days spaces will be cleared again and again for these moments of levity and ritual. Some Uyghur festival visits will turn into drinking parties complete with throaty singing accompanied by dutars, others will be more staid events where discussion will revolve around marriage, jobs and futures. Politics will undoubtedly be discussed. Religion will be avoided and promoted. But at the end of every visit an appointed man will raise his hands to his chin and offer a brief prayer in Arabic. Others around the table will also raise their hands and recognize the providence of God – then it is off to another meal of mutton and polu, mutton dumplings, salads and sweets. Despite their differences, Uyghurs in the city share an affinity to the same places, an attunement to the same cultural practices, ironic nostalgia for the same Red Songs; they have the same relationship to Uyghur food. 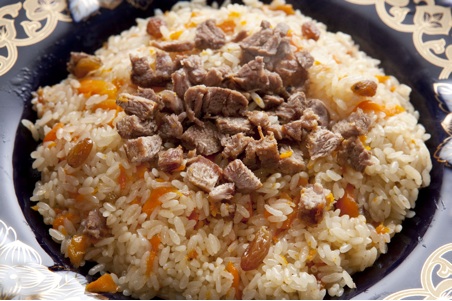 It works. When I talk to Uyghurs away from home they talk about how those slow festival meetings which last late into the night are one of the rituals that save them from their “gloom.” It works not because of the authenticity of the food as much as the memories it evokes and the conviviality it inspires. Food is an organizing substance that carries places – Hotan, Ghulja, Aksu – into the urban world of Urumchi and the Uyghur diaspora more generally.

The density of food as a locus of Uyghur sociality speaks to its status as a medium through which rural place-based knowledge systems migrate into urban situations; that is, knowledge moves through the traveling practice of “heritage” foodways. These practices of translocal knowledge become part of a therapy of emotive “comfort” and psychic-spiritual “well-being” in the midst of social alienation and readjustment. Melded to festival rituals Uyghur heritage cuisines and therapies present themselves as mediating actants (Latour 2005). They are phenomena which transport local knowledge through embodied care of the self and family, evocative topographies and communal actions. That is to say, under the special circumstance of the Qurban festival, Uyghur foodways appear to be things which act – that leave a trace – and perform on Uyghur sociality as much as they are preformed or enacted (Latour 31, 136). Food and the rituals of food are sites which sort, concrete, catalyze, transform and translate Uyghur sociality into the context of contemporary urban worlds in Northwest China.

Parts of this piece are drawn from a longer account of a personal experience of Qurban.

Latour, B. (2005). Reassembling The Social: An Introduction To Actor-Network-Theory.  Oxford University Press.

Jackson, M. (2013). The Wherewithal of Life: Ethics, Migration, and the Question of Well-Being. Univ of California Press.

4 Responses to “Dispatches From Xinjiang: The Social Effects Of Uyghur Food On Qurban”