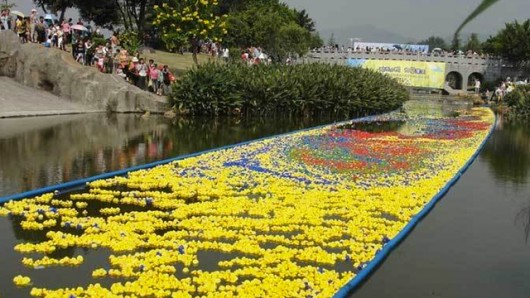 50,000 rubber ducks in Shenzhen, via Shanghaiist

Abbreviated links today, since we’re under the weather. Morgan returns tonight, so there’s that to look forward to.

Stabbing. “The attack occurred at a staff cafeteria in the Palace Museum, as the complex is officially known, said the state-run Xinhua news agency. In a statement posted online, the Public Security Bureau said the assailant, a 49-year-old employee surnamed Zheng, stabbed two colleagues, one of whom died instantly. The attacker was taken into custody after attempting to commit suicide, Chinese media reported. Photos of the crime scene, posted on the Sina Weibo microblog by the Beijing News, showed blood splattered on the floor beneath tables.” (Sinosphere)

Chinese water torture, etc. “As Yu Qiyi’s interrogation entered its 39th day, officials from the Chinese Communist Party’s anti-corruption watchdog debated how to get a confession out of the detained man, the chief engineer at a state-owned firm in eastern Wenzhou city. // One official noted he had forced Yu’s head under water the night before. A day later, Yu died after being dunked repeatedly in a bucket of ice-cold water. // Six officials were convicted last month of torturing Yu to death.” (Reuters)

Chinese police. “A casual visitor to China today does not get the impression of a police state. Life bustles along as people pursue work, fashion, sports, romance, amusement, and so on, without any sign of being under coercion. But the government spends tens of billions of dollars annually (more than on national defense) on domestic weiwen, or ‘stability maintenance.’ This category includes the regular police, courts, and prisons, but also censors and ‘opinion guides’ for the Internet, plainclothes police, telephone snoops, and thugs for hire, whose work is to keep citizens in line. The targets are people who tend to get out of line—petitioners, aggrieved workers, certain professors and religious believers, and others. The stability maintainers are especially attentive to any sign that an unauthorized group might form. The goal is to stop ‘trouble’ before it starts.” (The New York Review of Books)

This guy’s back. Shanghai, this time. “After visiting Shanghai’s Qiangwei Primary School, with 754 students — grades one through five — and 59 teachers, I think I found The Secret: // There is no secret.” (Thomas Friedman, NY Times)

Um. “A 57-year-old man in Muleng, Heilongjiang province, asked his online girlfriend out for a date only to find out that she was his own daughter-in-law. // The woman’s husband had followed his wife to the scene, and after a brawl, all three ended up in the police station.” (China Daily)

Hmm? “A woman who was found with her head stuck in a roadside guardrail has been confirmed as brain dead after a day of intensive treatment at a Beijing hospital. // The 26-year-old woman, identified as Le Le, remained dependent on a respirator. Doctors said her body had started to fail and even if she survived, she would stay in a vegetative state, Beijing Morning Post reported today.” (Sina)

@beijingcream Dont miss your free app download on the appstore before oct 26!

Who knew? Nixon's great nephew runs an #agritech startup in Shanghai — @SoilTap can't wait to see what you can do http://t.co/X3a48MBzin

“Account of an interview in a British Embassy, by the spouse of a British citizen.” (BritCits) 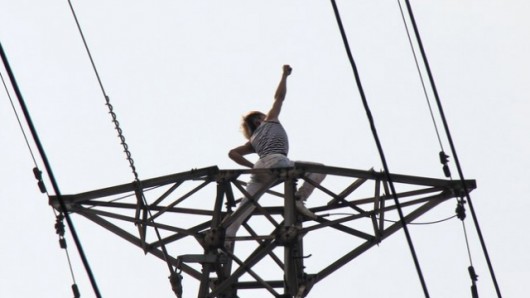