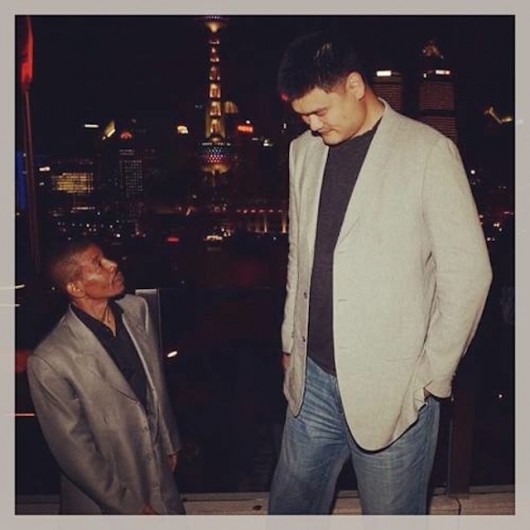 We’re nothing if not helpful links.

An event of interest to you Beijingers (info@bespoke-beijing.com). “Bespoke Beijing has teamed up Beijing Sideways (the sidecar tour company) to create the Beijing Time Chase, a scavenger hunt around the city’s hidden historical sights. Teams of two board a motorcycle sidecar (driven by an expert rider) and have just 3 hours to find the answers to clues scattered around the city. You’ll discover faded murals, damp underground bunkers, and even a temple made of rice… Ticket price includes an awards party at Big Smoke Bistro with free-flow food and drink, including Jing A beer and wine. Prizes include a weekend staycation at Kerry Centre Hotel and dinner for four at Opposite House’s Jing Yaa Tang.” (Bespoke Beijing)

And another! “We’re coming up to one year and 100 posts at the Anthill (if you’re in Beijing, come celebrate at our drinks night in Beijing next Monday) so are taking this opportunity to dig up some gems from the archive that new readers might have missed. If these stories inspire you, don’t forget you can submit your own and join the colony too!” (the Anthill)

And because everyone loves parties… “Great Leap turns three on Saturday (Oct 19). They’ll be celebrating all day at both locations. 300 kuai will get you all-you-can-drink beer. Pace yourself, young ones, some of their stuff is wicked strong.” (the Beijinger)

Land grab and cruelty. “Xie says she was dragged downstairs, where she saw her 69 year-old husband tied up on the floor. She says the men threw the couple into the back of a van and drove them to an outdoor courtyard nearby, where they were kept the rest of the day. ‘When they released us, we ran back and found our home had been demolished,’ Xie says. ‘All of my belongings, heirlooms, and family photos, gone. They had kidnapped us and robbed us of everything.’” (Marketplace)

On Xi Jinping, “playing with fire.” “China’s top leadership has recently commemorated the 50th anniversary of something few people have probably heard of — the ‘Fengqiao experience.’ Ring any bells? // Almost certainly not, because this is what I would call a ‘cold term’ (冷词), a Chinese Communist Party buzzword that has long fallen out of use and favor owing to its association with the Mao era. That has all changed in recent days. // The fanning to life of this Mao-era term is a lamentable surprise, the latest reminder of those chilly winds that have lately been blowing so strongly from the left, particularly as we near the 120th anniversary on December 26 of Mao Zedong’s birth.” (China Media Project)

More bloggers detained. “Police in China have arrested an influential blogger and are holding a cartoonist in a widening crackdown on online ‘rumor-mongering,’ friends and a lawyer for one of them said on Thursday. // Hundreds of people have been detained since August, say Chinese media and rights groups, as the government has stepped up its campaign to banish rumors. Most have been released, but some are still being held on criminal charges.” (Reuters)

Look which contest is back… with controversy. “Despite Gao having the highest number of votes on WeChat, he lost it all when someone outed him as Lin Ye, a 26-year-old male prostitute from Heilongjiang Province, who advertises himself on several homosexual websites with a ‘call me!’ ad featuring suggestive nude pictures and the slogan ‘正裝型男模特肌肉大牌,’ which basically means ‘stud muffin with big muscles.’” (The World of Chinese)

Clever? “A scheme in which a 13 year-old boy would hide in a suitcase and steal other passengers’ luggage in the compartment of the Guangzhou-Hong Kong bus has been exposed and the suspects arrested, Nanfang Daily reported yesterday. // Thirteen year-old A Min’s father is dead and his mother married another man. He met Mr. Xu in an internet bar in March this year and shortly after agreed to become partners in crime. A Min would hide in Xu’s luggage and, using a flashlight and a screwdriver, would steal other passenger’s luggage while in the compartment of a moving bus. His acquisitions included tablets, jewellery and cash.” (The Nanfang)

Terrible. “A 17-year-old has been held by police in connection with the murder of a taxi driver in the city’s Minhang District. // The teenager, surnamed He, a migrant worker from central China’s Henan Province, said he murdered the cabbie during an argument over a 40 yuan (US$6.5) taxi fare, according to police.” (Shanghai Daily)

An avoidable traffic accident. “A 24-year-old driver of a Jaguar sports car was killed instantly when his car crashed into a tree and a telegraph pole on Monday in the city of Kunming, Yunnan province. // Xinhua news agency reported that witnesses saw the white Jaguar F-type sports car racing against another car at around 4pm. The sports car swerved to avoid another vehicle ahead and drove off the road, crashing into a tree and then a telegraph pole. The driver was thrown from his seat due to the force of the impact and died instantly, the report said.” (SCMP)

“Beijing introduces new rules to curb car use on bad pollution days.” (Behind the Wall)

“China and Iran: Destined to Clash?” (The Diplomat)

From Justin Mateen, co-founder and SMO of Tinder, via Angry Asian Man: 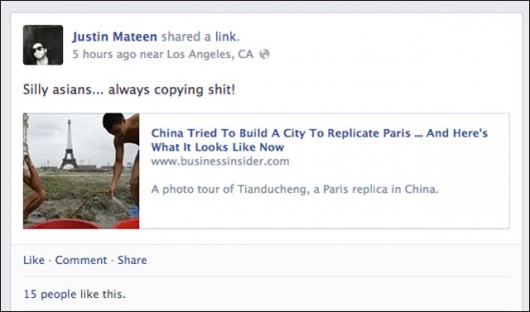