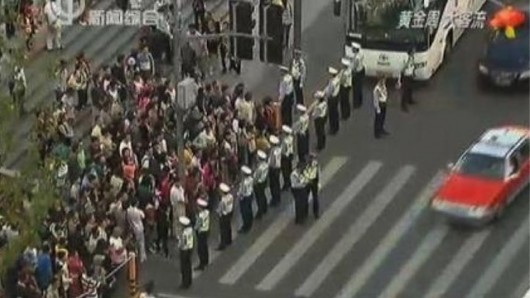 No jaywalking, and they’re serious, via Shanghaiist

Obviously we’ve missed lots of stories in the past few days, but some of the better ones are below in this extended vacation links edition.

Another typhoon. “A typhoon slammed into southeastern China on Monday with powerful winds and heavy rains that cut power, canceled flights and suspended train services. // Typhoon Fitow struck Fuding city of Fujian province with winds of up to 151 kilometers (94 miles) an hour in the early morning hours, then slowed before weakening to a tropical storm, the National Meteorological Center said.” (AP)

With video. “Going viral amongst HK’s netizens this week is a video of a woman repeatedly slapping her kneeling boyfriend on a Tokwawan street. The original clip received over 300,000 views in 2 days.” (Hong Wrong)

Tragedy. “A Hungarian wingsuit flyer was found dead after he plunged into a valley in central China’s Hunan Province during a trial flight yesterday, rescuers confirmed today. // The flyer, Victor Kovats, plunged into a valley around 3 pm in Tianmen Mountain National Forest Park in Zhangjiajie City during a trial jump as his parachute failed to deploy before landing.” (Shanghai Daily)

This is gonna be great for social development. “On the campus of a secondary school in China’s famous silk city of Hangzhou, pupils of the opposite sex have been given a very important new instruction. // They must maintain a minimum distance of half a metre (1.64 ft) from each other at all times. In addition, boys and girls are not allowed to go around school premises in pairs.” (BBC)

Forced abortion? “At 4am last Friday, a group of 20 officials from the Shandong Province Family Planning Commission forced their way into the home of Zhou Guoqiang and his wife Liu Xinwen. // The officials kicked down the door of the family’s home. Mr Zhou was held down while his wife was pulled from her bed and taken away. // Liu Xinwen, 33, was taken to the People’s Hospital of Fangzi District in Weifang City where she was injected with an abortion-inducing drug.” (Sky News)

Question: what is patriotism? “The latest viral response is from a college student in Beijing. When asked about what came to his mind after hearing the word ‘patriot,’ the student in the picture answered: ‘Patriot reminds me of missiles.’ // The response, while completely off the point, perfectly illustrates the absurdity of asking such questions in today’s China, especially among the younger generations.” (Offbeat China)

Rumors in Xinjiang. “After a month-long investigation by Chinese authorities, 110 people were detained in northwest China’s turbulent Xinjiang province for spreading online rumors, according to state-run media. Another 164 received warnings, and almost 400 were investigated altogether.” (Tech in Asia)

Necessary. “Major tourist locations moved to relieve the pressure from “golden week” visitors yesterday – by locking them out – but travel woes continued, prompting experts to question the benefits of such week-long holidays. // Managers of Jiuzhaigou national park in Sichuan province stopped ticket sales on Thursday and yesterday after 41,000 tickets – the daily limit of visitors the park can accommodate – were sold out. The move came after more than 4,000 people were left stranded in the world-famous valley for up to 10 hours on Wednesday.” (SCMP)

Today in long DM headlines that tell the entire story: “Gambler thrown from 11th floor window for not paying up miraculously lands in a chimney… but faces losing both legs as he was wedged in so tightly it cut off blood circulation.” (Daily Mail)

Timelapse of drive through Pyongyang interlude, via Koryo Tours:

Shenzhen has a cat lady. (The Nanfang)

A heartening “no peeing” sign in Macau, via Isidor’s Fugue: 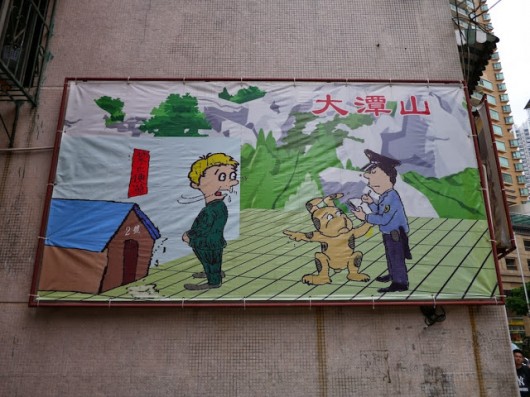