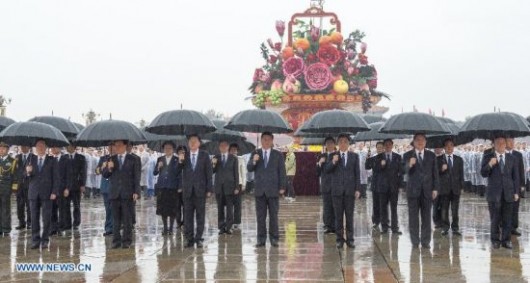 We’re taking a vacation. Links will go on though.

China is 64. “6-4 is also notable in China. On that date in 1989 civilian protesters in Beijing’s Tiananmen Square were the target of a violent crackdown. Mentions of the date are often censored in China, and it is not uncommon for it to be obliquely referenced with terms such as “May 35″. As the South China Morning Post reports (via China Digital Times), some saw today’s 64th National Day as opportunity for another indirect reference.” (Isidor’s Fugue)

1st time in 24 years, 6 and 4 are NOT sensitive numbers in China! (characters in the pic: "unforgettable". 六四不再是敏感词。图 pic.twitter.com/Duo9ONbrEV

Ech. “A two-year-old boy from Huaxi, has undergone an operation to give ‘birth’ after doctors diagnosed him as ‘pregnant’. // Xiao Feng, was brought to hospital after his stomach had become so distended that he had begun to suffer breathing difficulties. // Once admitted, doctors took x-rays and MRI scans and discovered that Feng was carrying the undeveloped foteus of his own twin inside his stomach and they rushed him to surgery.” (Daily Mail)

What, me worry? “Zhou Yongkang, 70, one of the most powerful Chinese politicians of the last decade, attended an alumni celebration at the China University of Petroleum, according to photographs posted by the university on its website. // …Zhou retired as security tsar and from the Communist Party’s all-powerful Politburo Standing Committee during a sweeping leadership reshuffle last November. // Hong Kong’s South China Morning Post reported in late August that Zhou was facing a corruption probe. U.S.-based China-watching news site Duowei said earlier Zhou was under investigation for graft but later withdrew the report for unknown reasons.” (Reuters)

Siberian tigers. “Once believed nearly extinct in China, the Siberian tiger, the largest member of the cat family, is making a comeback, the result of a decade-long effort to restore its natural habitat by banning logging, hunting and trapping.” (LA Times)

Good foreigner rescues woman in need. “After a woman fell into a river in Guangzhou’s Haizhu District in the small hours of Friday, a Venezuelan man heard cries for help and got out of his taxi to jump in and come to her rescue, Nandu Daily reports.” (The Nanfang)

Bad suicide attempt. “In a moment of cruelly poor timing, a suicidal man who jumped from a building in Guangdong hit a 56 year old biker on the street, killing him. The jumper, unharmed, then fled to a nearby high-rise building and attempted to jump again. // The young man was reportedly caught on CCTV earlier this week attempting to jump to his death from the fifth story of a building in Shantou, Guangdong. On the way down, however, he hit a biker below, crushing him. // The biker suffered broken ribs and died soon after being rushed to the hospital, according to his daughter.” (Shanghaiist)

China knows its cigarettes. “Nine in 10 children in China can identify a cigarette logo, according to a study by Pediatrics amongst five and six year olds in six countries that include Brazil, China, India, Nigeria, Pakistan and Russia where adult smoking rates are the highest.” (Shanghaiist)

Sad. “An 11-year-old Chinese girl in southern China’s Guangdong province has admitted to killing a 7-year-old girl playmate living next door due to constant run-ins. // The 7-year-old victim Xiaoting and her grandmother are residents of Guangkeng Township, Dongguan City in Guangdong Province. The grandmother reported to the local police of girl’s disappearance at around 9 p.m. on Sept. 29, according to a report by Southern Metropolis Daily.” (Epoch Times)

Between Guangdong and Hainan. “Rescuers Tuesday found 14 fishermen alive, retrieved two bodies and are continuing search for 58 others missing in the South China Sea after three fishing boats have sunk since Sunday afternoon due to Typhoon Wutip.” (Xinhua)

Students get plastic surgery in order to find jobs. Seems wrong they feel the need to http://t.co/PhdzcrLrTA

Anti-Chinglish campaign in Shenzhen. (The Nanfang)

“What Happens When Only 1.2% of Chinese Women Take the Pill: 13 Million Abortions.” (Time)

“In China, It’s the Grandparents Who ‘Lean In.’” (The Atlantic)