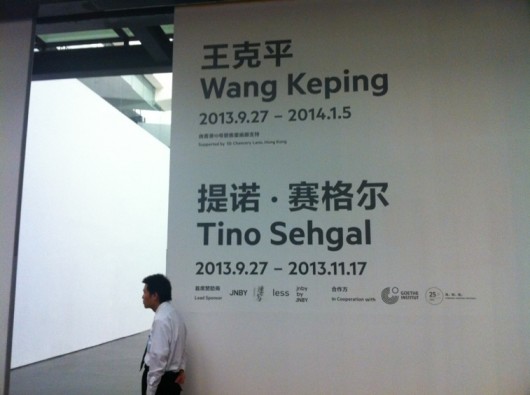 Tino Sehgal is a pretty big deal. And undoubtedly, 2013 has been his best year yet. In June, he was awarded the Golden Lion at the Venice Biennale – for an artist, this is comparable to an Oscar or an Olympic gold medal. Earlier in the spring, he was one of four artists shortlisted for Tate Britain’s prestigious Turner Prize. At 37 years old, he’s amassed an impressive resume of institutions where he’s exhibited, including a solo show in New York’s Guggenheim Museum in which the main spiral of the building’s interior was emptied out for one of his tightly choreographed “constructed situations.” You know where else he’s been exhibited?

The Ullens Center of Contemporary Art in 798 Art District, Beijing. That’s where his current exhibition, which opened on September 27, will remain until November 17.

UCCA is understandably thrilled to provide space for Sehgal’s “largest and most comprehensive” exhibition in Asia thus far. Whether or not you know (or care) what the Golden Lion is, this is not an exhibition to be missed.

Seghal’s work is categorized by many as performance art, self-described as “constructed situations” in which “interpreters” interact with each other, the environment, and the gallery-goers. If you’re not sure what that means, don’t let it intimidate you; your engagement with Seghal’s work will not involve decoding a text full of art terminology on a gallery wall. Experiencing his constructed situations requires only that you look, listen, and respond in whatever way you choose.

Performance art is nothing new, but there are several reasons why Sehgal’s way of working is noteworthy. Because performance is ephemeral, most artists incorporate documentation into their processes in one way or another. The mediated version becomes the primary delivery method of many performance works. Sehgal, on the other hand, completely rejects documentation. It should be noted that he studied dance and worked as a choreographer before beginning his art career. Photos and video are not permitted in his exhibitions, and there is never an exhibition catalogue. If you Google image search “Tino Sehgal,” you’ll find plenty of pictures of him, but none of his artworks. (I actually recommend doing this if you’re interested in seeing a goofy picture of him with his Golden Lion award.) (Ed’s note: here.)

In 2008, New York’s Museum of Modern Art famously purchased one of Sehgal’s earlier and best-known works, Kiss, for a five-figure amount — all without written or photographic documentation. Sale agreements with Sehgal are entirely oral and strictly dictated by the artist. The gall of a young artist demanding this from buyers like the MOMA was sensational and no doubt contributed to interest in Sehgal’s work. (Kiss involves two interpreters who kiss and touch, recalling historically significant works of art employing kissing couples as subjects — Rodin, Klimt, and Brancusi, among others.)

Prior to seeing the UCCA exhibition, I’d only seen one work by the artist, This is Propaganda, at the New Museum in New York City. In that one, an interpreter sang, “This is propaganda. You know… you know.” It was followed by a spoken signature, “Tino Sehgal,” and the year. This repeated every time a new person walked into the gallery. I thought it was hilarious and brilliant. The lyrics and delivery, very particularly directed by Sehgal and staff, was somehow perfectly on point. The repetition, routine, and combination of singing and talking lent it a religiosity. This is Propaganda was part of a large group show, but post-museum conversation that day tellingly centered on that work.

The pieces at UCCA are far more complex and elaborately choreographed than Kiss or This is Propaganda. The bulk of the currently used gallery space is devoted to Sehgal’s This Progress, which is the same work that took place in the Guggenheim in 2010. At the opening reception last Thursday, I found myself standing in a line outside the gallery, not knowing why. Sehgal was reportedly unhappy about the queue, but I understood why it was necessary, as there are precise timing requirements for this piece. Moving through the work involves talking about progress, first with a child, and then a sequence of interpreters of increasing age. I was aware of our leisurely but purposeful pace along the designated path through the gallery as one interpreter handed me off to the next.

The conversations were relaxed and enjoyable. The piece is choreographed but not scripted, and the interpreters’ engagement feels genuine. My final conversation included a little bit of Peking opera sung by an elderly woman who has been an enthusiast for years. Admittedly, the UCCA can’t provide nearly as thrilling a space as the iconic spiral of the Guggenheim, but located in the capital city of a rapidly changing country, it’s an interesting venue for other reasons. All of the interpreters in this piece are Chinese, and their ascending ages offer an opportunity to consider the vast generation gaps that exist here amid a state of constant transformation.

This Variation is the other Sehgal work at UCCA. The original venue for it was Documenta 13 in Kassel, Germany in 2012, and it was one of two exhibitions that scored Sehgal his Turner Prize nomination. In this work, interpreters move and dance around a dark room. The interpreters sing, dance, talk, hum, and clap in a way that feels semi-coordinated, then transition without warning via undetectable cues. At one point in this piece, the interpreters sang the Beach Boys’ Good Vibrations.

Like This is Propaganda, This Variation has a religious quality. But the delivery is communal and ritualistic rather than preachy. The experience reminded me of being in a sweat lodge, in part because the low-ceilinged room was uncomfortably hot. It was also reminiscent of my experiences attending religious services where everyone but me seemed to know what to do and when. If the interpreters are clapping, should I clap too? What I find glorious here, though, is that this is art and you can do whatever you want.

When you first walk in, you can’t see, and it’s unclear how many people are in the room or where the walls are. A friend wisely advised me to leave my glass of wine outside. The first steps are tentative and may involve walking into people. Then, as eyes adjust, each person finds a place where he or she feels comfortable. Some people immediately lit their way with cell phones, others sat quietly on the floor. One woman applauded before leaving, while some who knew each other awkwardly clumped together and whispered. This Variation has a physical resonance that’s immersive in a totally different way from the verbally driven This Progress. In this way, the two works complement each other beautifully.

Also at the UCCA, concurrent with the Tino Sehgal exhibition, are sculptures by Wang Keping, a Beijing artist from the group called “the Stars,” who formed the vanguard of contemporary Chinese art beginning in the late 1970s. The gallery devoted to his very consistent wooden sculptures has a lot of work in it, maybe too much. Unfortunately, problems with shipping prevented the arrival of some very large works meant for display in another, higher-ceilinged exhibition space. Customs issues have also delayed the work for Taryn Simon’s exhibition, A Living Man Declared Dead and Other Chapters I-XVIII, the result of four years of exhaustive global research of bloodlines. Hopefully when you visit the UCCA (and you should), Simon’s work will be installed, as it promises to be very worth checking out.

Lauren McCarty is a teaching artist from Philadelphia currently living in Tianjin. She can be reached at laur768@gmail.com.