Like the rest of contemporary China, Xinjiang is going through a rapid economic transformation. By simultaneously depoliticizing the economic and encouraging a new ethic of entrepreneurialism, new forms of governance and subsidized development in Xinjiang are drawing waves of rural Han migrant workers from other parts of China. In general terms, these new arrivals are faced with the same uncomfortable environment and displacement that confronted Ai Qing, China’s preeminent revolutionary poet and father of the rabble-rouser Ai Weiwei, when he arrived in the late 1950s. In fact, throughout China’s history new migrants to Northwest China have been forced to resolve whether Xinjiang can be transformed into a home — in Heidegger’s phenomenological terms, a place of being – or if it will remain a location of social exile, an oblivion of being, far from their ancestral villages in Eastern China.

Ai was an old man, 68, when he was rehabilitated by the Party in 1978. After more than twenty years of reeducation through toilet-cleaning in a military-agriculture forced-labor camp in the steppes of Northern Xinjiang, Ai told Geremie Barmé that he was a “fossil-poet” (Barmé 1999: xi). Riffing on his recently published poem “Living Fossils” (Huó Huàshí), Ai compared his existence to that of a leaping fish frozen in a sudden catastrophe in a prehistorical strata of the earth. Discovered in the durative present the fossilized fish seems as vital as the day it had been subsumed (Barmé 2011).

“But you are silent, breathless, / …Faced with this fossil / any fool can see: / We cannot live unless we can move. / To live is to struggle, / to advance / We must expend our all / Before the advance of death” (in Barmé 2011).

The sentiment behind this poem recalls the smothering effect of exile on Ai Qing’s life. He went to Xinjiang in 1959 at the height of his powers and emerged from the wilderness in 1978 an ancient poet. Ai wrote surprisingly little about his time in Xinjiang. Only an introduction to a book of photography called The Heavenly Mountains (Tian Shan) deals with his time there directly. Describing the mountains as an elegiac landscape, Ai focuses the reader’s attention on the colors and sounds of the forests, the danger inherent in converting wildness into land which sustains life, the deaths that are buried next to escarpments on winding roads. He speaks with great fondness for the shrouded mystery of the mountains and the warmth of the people who lived there. Reading through the sparseness of the prose, one senses a great mind which sweeps in all the details around him. (Excerpts from the four-page essay followed by the Chinese can be viewed here.)

The essay turns on decisive moments in the summer of 1968 when the cultural struggle intensified and Ai was dragged out across the desert to a labor camp far from the mountains. As his son puts it, his writing materials were taken away from him, he was made to scrub communal toilets, and the Ai family was forced to live in an earthen pit covered with brush and mud (2011:53). It was during moments of living in this atmosphere of intense alienation that Ai looked across the desert to the mountains floating in the distance and still found a way to smile. As he put it: “no matter where I was, if it was a sunny day I always look to the South for the trace of the mountains against the horizon” (Ai Qing 2007: 67).

Ai Qing’s legacy has left little impression in Xinjiang. The only public marker that remains is a small shrine in the Shihezi, Xinjiang Production and Construction Corps Museum (Xīnjiāng Shēngchǎn Jiànshè Bīngtuán Bówùguǎn). 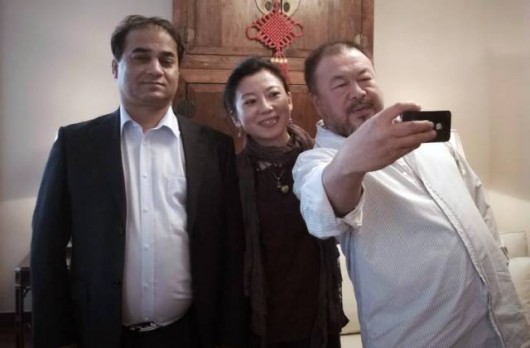 Yet the legacy of his life lives on in his son Ai Weiwei. July 9, 2014 will mark the five-year anniversary of the terminal censorship of Weiwei’s famous blog. On that day he wrote a stinging critique of the government’s handling of the July 2009 riots in Urumchi:

I lived in Xinjiang for sixteen years and never had the opportunity to come in contact with Uyghurs, so I don’t really understand them. This should be enough to illustrate the problem. I’ve had limitless contact with the Han, and I know how shameless and capable of disappointing some of them can be…. Freedom is limited by the freedom your prisoners enjoy, without freedom for others; you will never have a day of peace (Ai 2011: 235).

In what follows, he outlined how recent policy in Xinjiang reflects a governance structure that favors those who stand to benefit from existing power relations from Beichuan to Urumqi. This rebuke turned out to be the last post he was permitted to publish.

As I have written elsewhere, in the summer of 2011 Ai Weiwei was released from prison after three months of hooded confinement in what he stated was as close to spiritual death as is physically possible. I can imagine that he must have thought about what it felt like for his father, a maroon in a Chinese Central Asian desert, cleaning toilets, digging out a home for free thought with his bare fingers.

Yet what distinguishes Ai Weiwei from his father is the way he has been able to surround himself with friends who support and amplify his work. Unlike the oblivion experienced by his father, Weiwei has built himself a self-enclosed retreat in Beijing, and in recent times has begun cultivating a friendship with one of the most courageous Uyghurs living in China today: the social commentator Ilham Tohti.

While his father was banished for his loyalty to his friends — namely the great socialist-feminist fiction writer Ding Ling – Ai Weiwei has found in solidarity a prophylactic. By converting the givenness of existence into life made meaningful by friendship, laughter and affection, Ai Weiwei is subverting the despair of alienation. He, and hosts of other minor actors in the great Chinese drama, remind us that those who both mindfully and mindlessly dominate the culturally different are not the only players in the art of life in Chinese Central Asia. A politics of recognition, an ethics of sharing pain, is also possible.

—  (1999). In the red: On contemporary Chinese culture. Columbia University Press