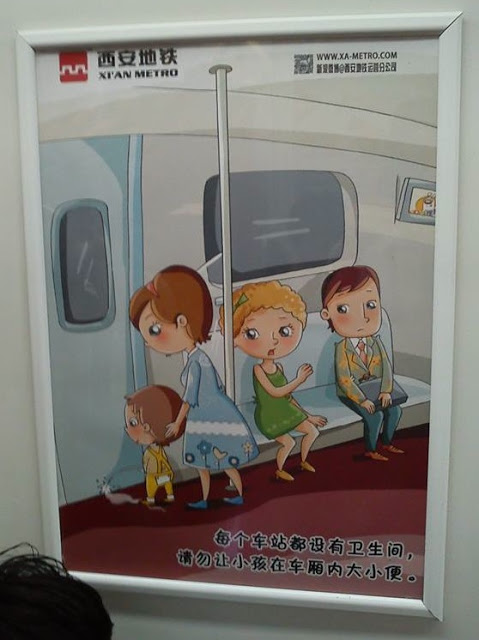 No peeing in Xi’an subway, via Isidor’s Fugue

Apologies for the scarcity of posts recently. We’re — okay, I’m — prepping for a visa run. Run of links for now.

What to do? “In both cases the message is clear and unsettling. China is pressing foreign news organisations more than ever to pull punches in their coverage. And it appears to be getting harder to resist such demands. In 2012 both Bloomberg and the New York Times defied pressure not to publish exposés about the wealth of the family members of China’s top leaders, including Xi Jinping, now president, and Wen Jiabao, then the premier. Authorities responded by punishing both organisations. Their websites have been blocked in China, and Bloomberg has lost some of its lucrative terminal business.” (Analects)

Typhoon Haiyan. “The official death toll in Hainan province and the Guangxi Zhuang autonomous region was raised to 10 on Tuesday after Typhoon Haiyan grazed the coast of southern China, with millions affected, according to local civil affairs authorities.” (Xinhua)

Chinese aid for Philippines. “The U.S. has promised $20 million in aid for victims of Supertyphoon Haiyan in the Philippines and has mobilized an aircraft carrier for the relief effort. Britain is also sending a warship and has pledged $16 million. The Vatican is dispatching $4 million, Japan $10 million and New Zealand $1.7 million. And China, the world’s most populous nation and second largest economy? // It’s handing over $100,000.” (Time)

Ha. “What do you do when you hire a prostitute and midway through sex the condom slips off and you haven’t gotten your happy ending yet? Well, this 54-year-old man kept going! // The 37-year-old prostitute agreed to have sex with the man for HK$200 in Yuen Long, Hong Kong. Halfway through sex the condom slipped off and the man continued going without a condom. The prostitute later asked the man to pay an extra HK$200 but he refused.” (Coconuts Hong Kong)

Damn. “Since the term was first coined in mid-August at the China Internet Conference, Sina has closed or otherwise ‘handled’ 100,000 accounts on its Weibo microblogging service that have violated the principles, according to a Wednesday report from the state-run Beijing Youth Daily.” (WSJ)

Interesting selection. “The headquarters of China Central Television (CCTV) in Beijing has been named the ‘Best Tall Building Worldwide‘ by the Council on Tall Buildings and Habitat during its 12th annual award ceremony in Chicago last week.” (That’s Online)

The fuck? “A Jinan man’s crazed puppy-killing spree at a local market has gone viral online, hitting the Chinese internet and even doing rounds in the foreign press. Three photos of the man have emerged online that tell the story; firstly, he is looking at puppies in a local shop; secondly, a dog nips him, and thirdly; he kills it and throws the body on the ground, because people are horrible monsters.” (Shanghaiist)

No good. “At about 11:20 am on Friday, police in northern Shanghai’s Baoshan district received a report that two women had been attacked on Shangda Road and were lying on the ground with bloodied heads. // Police officers and medical workers were sent to take the women to a hospital and search for the suspect. // About 10 minutes later, officers captured the suspect, Hu, on Hutai Road and seized an iron hammer he was carrying.” (China Daily)

Quite the gift. “Wealthy bridegroom sent abundant betrothal gifts to the bride’s family, including 8888,888 in cash, weighing 102 kilos on November 12 in east China’s Zhejiang province.” (Sina)

Immolation. “A young Tibetan monk burned himself Monday in protest against Chinese rule in Tibetan-populated areas and demanding the return of Tibet’s spiritual leader the Dalai Lama, sources said.” (RFA)

“Western Media In China: Adjusting To The ‘Anaconda.’” (NPR)

“Graphic Sex in Characters.” (The World of Chinese)

“Guangdong is the most single province, Chengdu the capital for unattached women, and journalists are so, so alone.” (Shanghaiist)