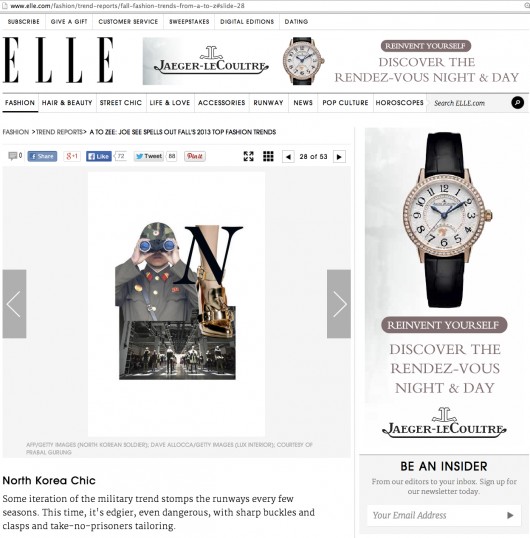 Public backlash has caused Elle to pull an image of a North Korea soldier from the online version of Joe Zee’s September “A to Zee” column about military trends.

As first uncovered* by Washington Post’s Max Fisher on November 19:

Elle magazine, in an article posted today on its Web site, names “North Korea Chic” as one of its “top fashion trends” for the autumn of 2013. Just in case the article disappears mysteriously from Elle’s site, just as the Asma al-Assad profile did from Vogue’s site when backlash mounted, here is a screenshot of the first page on North Korea Chic:

The picture is above.

As an example of North Korea Chic, Elle points to a pair of designer camouflage pants that sell for $425. (The average North Korean is thought to make about $4 per day.)

Elle’s creative director, Joe Zee, writes that “North Korea Chic” is known for its “take no prisoners tailoring,” which is presumably not a play on North Korea’s practice of kidnapping foreign civilians and holding them captive for years or decades at a time. Zee compares it favorably to other military-themed fashion trends, adding that North Korea Chic is “edgier, even dangerous.”

…Still, it’s only fashion, and perhaps it’s easy for foreign policy observers to take ourselves too seriously. What’s really wrong with winking at North Korean militarism to sell $400 pants? For that matter, why not a line of footwear by Pol Pot? Or grooming tips by Stalin? Maybe affix Mao’s name to next month’s diet plan?

In any case, here’s Elle’s statement from yesterday, featuring the classic non-apology — to those we offended. A couple of angry letters from readers are also within that link.

The edition of Joe Zee’s A to Zee column that ran in the September 2013 issue of the magazine stirred some controversy that was addressed in the Letters section of the November issue. Here is the official statement from ELLE regarding the story, with the full text of the initial response below: We regret the reference to North Korea in our post on the season’s military trend, and have removed the image. We apologize to those we offended.

*Update, 3:24 pm: That’s Online’s James Griffiths points out a tip of the hat should go to Samantha Culp: