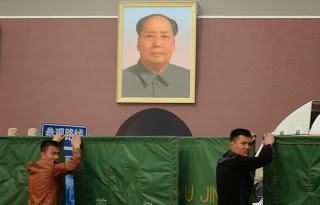 Of course, the perpetrator turned out to be Timothy McVeigh, a Gulf War veteran who sought to avenge the actions of the US federal government at Waco and Ruby Ridge.

The incident at Tiananmen Square on October 28 saw a Jeep driven into a pedestrian area before three passengers set the car alight, killing themselves and two innocent tourists and injuring 38. It appears to be a relatively crude attack with no complex coordination or sophisticated weaponry (they carried knives, machetes, and petrol). The World Uyghur Congress and Ilham Tohti, a Uyghur scholar under house arrest, have called for calm until we have real information, and so that this incident is not used to increase repression in Xinjiang.

The central government has thus far released very little information except to say this was a “carefully planned, organized, and premeditated attack” that included flags with “extreme religious content.” What this actually means is unclear at best. The fact that the passengers were a man, his wife, and mother suggests there is a lot more to this story, and the image of international terrorists doesn’t fit the facts.

Foreign media has a remarkably hard job on its hands making sense of it all because the security apparatus was so quick to conceal the entire incident with large police screens. It may be impossible to verify any narrative the party-state decides to tell. Experts on Xinjiang have long considered these official accounts to be problematic at best and deliberately misleading at worst. International journalists, such as AFP, have had their photographs seized, domestic media have been given instructions to follow the official line in framing the issue as “terrorism,” and posts on the subject have been disappearing from Sina Weibo, China’s largest social media network, as quickly as they are posted.

Most media outlets reprinted a police notice issued to hotels that instructed people to watch out for “suspicious people” and Xinjiang registration plates, naming two suspects with Uyghur names from the Piqan (shanshan) and Guma (pishan) counties. The statement was printed online with some simply publishing the presumption that the suspects are Muslims.

Zachary Keck of the Diplomat went further with the irresponsible article, “Al-Qaeda in Xinjiang Uyghur Autonomous Region?” which offered no consideration of perspectives from Xinjiang. USA Today ran a story under the headline “Muslim family led Tiananmen suicide attack” (emphasis mine). No one knows for certain the religion of the perpetrators or if it bears any relevance to their actions. Nevertheless, it appears racial profiling has already begun in Xinjiang with warnings to residents of Shanshan county to be on guard for anyone “suspicious with a big beard or burka.”

Identifying the men simply as Muslims obscures a huge ream of complex social factors and controversial policies in Xinjiang which have ethnicized social tensions and sparked small-scale incidents of violence in the region. In recent years, such policies have included discrimination in employment, the eradication of Uyghur language as a medium of instruction, the persecution of writers as “separatists,” the confiscation of Uyghurs’ passports, the demolition of old Kashgar, as well as growing restrictions on fasting for Ramadan and wearing Islamic clothing.

If it is true that a group of Uyghurs were responsible for the car attack, then we will need to consider how the party-state’s approach to security works in the region. The LA Times suggests this attack at the heart of Chinese power “has raised doubts about the effectiveness of its security apparatus.” Experts on Xinjiang have raised doubts about this for a long time. However, the weakness lies not with the number of troops posted in Xinjiang or Tiananmen or with the number of armored vehicles patrolling Uyghur neighborhoods. The weakness lies with thinking that long-term security comes down the barrel of a gun.

The party chief for Xinjiang, Zhang Chunxian, unveiled a plan last year to have armed police every 100 meters in urban Xinjiang. This does not suggest that the party-state is in control, but that it is very insecure and has to use violence to maintain the position of Uyghurs as an ethnic minority in China. These methods which are supposed to improve security (i.e. restrictions on religion, monolingual language policies, and arresting authors of fiction) make Uyghurs feel their identities and their individual well-being are threatened.

If we want to take security seriously, then a more pertinent question is how to make Uyghurs feel more secure and to give them channels to express their insecurity so that they do not feel the need to turn to violence. The policies above and the incidents they sparked suggest that the more the Chinese government focuses on “security,” meaning surveillance of Uyghurs, the more insecure Uyghurs feel, and the higher likelihood of further violence. The best way to address this security issue would be to listen to those who feel most insecure in Xinjiang and deal with their concerns. These voices can offer perspectives on the issue beyond relying on lazy essentializations of Islam to frame an as-yet entirely unexplained act of violence.

7 Responses to “The Tiananmen Attack And China’s Insecurity Problem”