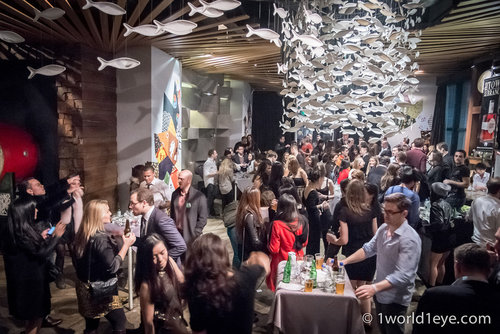 Chi Fan for Charity afterparty at Hatsune, via the Beijinger

Happy Monday to you. More after the links.

Are they killing stray cats at Temple of Heaven? “Officials at a famous Beijing park said Sunday that they were investigating the mysterious deaths of stray cats in recent weeks, as protesters accused park authorities of killing the animals. // The Temple of Heaven park has stepped up patrols in an effort to prevent more deaths and cat carcasses from being dumped inside, said a park spokesman.” (AP)

November 9-12. “What is the ‘Third Plenum’? It is a ceremonial gathering of the Communist Party elite which will adopt a document on economic reforms (and some other things). The important event is the unveiling of the document. ” (ChinaFile)

Censorship. “A Montreal artist is fearing that six months’ worth of his work may have disappeared into the vaults of Chinese censors after a Beijing gallery hosting one of his shows mysteriously vanished in an apparent raid. // ‘It’s pretty overwhelming,’ said Ben Clarkson, a Manitoba-born artist and illustrator now living in Montreal. // ‘You hear rumours about this kind of stuff, but you never think you’re going to get caught in an international incident.’ // Mr. Clarkson’s show, Mirror, Mirror, was set to run from late October to early November at Duck Soup Projects, a Beijing-based exhibition space.” (National Post)

Fallout for Tiananmen attack. “The official, Gen. Peng Yong, chief of the People’s Liberation Army in Xinjiang, was removed from the region’s Standing Committee, according to a one-sentence notice on Sunday on the front page of the newspaper Xinjiang Daily. The statement provided no explanation for his replacement by Liu Lei, a veteran army official in the region.” (NY Times)

But the body remains in China for now. “The family of the Filipino tourist killed in an incident at Beijing’s historic Tiananmen Square is back home. // Nelson Bunyi and his daughters, Francisca Isabela and Michaela, arrived at the Ninoy Aquino International Airport (NAIA) on a private flight from Shanghai, China on Saturday evening.” (Rappler)

Walking Dead in China. “The show is especially attractive to Chinese fans because there’s no domestic equivalent on cable television. // …China’s morbid fascination with the apocalypse is another likely factor driving The Walking Dead’s popularity.” (Tea Leaf Nation)

Video about Chinese students in America interlude, via Shanghaiist:

“6 tourists, including 2 Russians and 1 Chinese, killed in ferry accident in eastern Thailand.” (AP)

“Nanluoguxiang and 30 years of China.” (Sam Crane, The Useless Tree)

Another storytelling night in Beijing, this time at Zajia Lab, November 10. (LumDimSum)