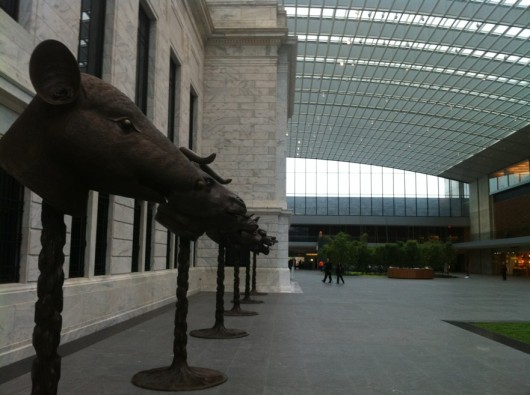 Some Friday links are included in here, since we missed Friday’s links.

Covering China. “Today, the story is at once more accessible and more dangerous. To cover China is to chronicle the world’s second-largest economy, a rising superpower, and one-fifth of the world’s population. China is so central to our economic lives that journalists have had no choice but to engage China with greater technical analysis and precision.” (Evan Osnos, The New Yorker)

On that Friday Qingdao pipeline blast that killed at least 52. “The Beijing News, an aggressive commercial newspaper, suggested that the lack of sufficient warning might have contributed to the death toll. // ‘According to already public information, from 3 a.m. when the leak happened to 10:30 a.m., in the space of more than seven hours, the company and even the local government it seems were only busy with handling the leak,’ the paper said in a commentary Monday. ‘No warning to evacuate residents has been seen, and from news reports, many residents regarded this as a sudden disaster with no chance to prepare. This perhaps is a reason for the large toll of dead and injured.’” (Sinosphere)

Headline: “Husband and Wife Desiring Child Discovers They Are Brother and Sister, Wife’s Father and Husband’s Mother Were Lovers.” (chinaSMACK)

Calling Photoshop experts. “As more and more officials are blackmailed using faked digital photographs, the government is asking scientists for help. // Research teams at major universities have received funding from the central government to come up with ways to help the authorities quickly determine whether an image has been manipulated by photo-editing software such as Photoshop. // In China, sending a government official a batch of sexually-scandalous photos for extortion has become a thriving business. Sometimes the pictures are real, but in most  cases the official’s head has been superimposed on to a body that does not belong to him.” (SCMP)

Look who has prosthetic eyes. “Guo Bin has undergone a series of operations for the prosthetics to give him a natural appearance but these will not restore his vision.” (BBC)

Li Guanfeng back in Beijing. “A court in Beijing on Tuesday heard the appeal of two defendants, including a son of a well-recognized uniformed tenor, who were given prison terms for gang rape. // The 17-year-old son to the 74-year-old singer Li Shuangjiang and the other juvenile offender surnamed Wang stood the second trial in Beijing’s No.1 Intermediate People’s Court. Defense lawyers of the both insisted on the advocacy of innocence, the court said.” (Global Times)

Maison Boulud rumored to be closing in Beijing. “The hot news flying around late this weekend was text message whispers of the Chi’en Men 23 institution Maison Boulud’s incipient closure. After five years of foie gras and madeleines, Daniel Boulud’s Beijing outpost is rumored to be shutting its doors on December 8.” (the Beijinger)

Chinese photographer profile. “I first came across the introspective photography of Lahem (拉黑) (born 1984) on the Chinese street photography collective Zaijietou.com (meaning ‘in the street’). We finally met in 2010 at the Shanghai Photography Night run out of Dada Bar. I recalled him a shy but excitable man, and in the few times we’ve spoken over a dinner here, an exhibit there, I’ve grown to admire his passion, thoughtfulness and resolution for his craft. It could be his Chinese Literature background from Fudan University that compels him to delve philosophically about the nature and meaning of his work. Or his small town roots that highlight the contrast of his generation in China’s hyper urban society today.” (Shanghai Street Stories)

This is what makes China great. #guangzhou #beer http://t.co/1H0XCrayNq

This company will help any country build their own Great FireWall among other services http://t.co/5JSa8uVAbf

Use of Wikipedia in expert opinions (this recently came up in the China context): my take | http://t.co/nNa53y12mR

With Gary Locke stepping down, why not name Bloomberg CEO Dan Doctoroff new US ambassador? There's a man who knows how to work with China!

This was the scene nearby my home here in Urumqi yesterday. Nice blanket of snow! http://t.co/VZCvtWo4Za

Two on art, beginning with: “Just as China announces plans to curtail its one-child policy, a new art exhibition in Beijing takes a look at the experience of being an only child – through the eyes of an artist whose work focuses on the lonely children of his generation. // Meng Site, 25 years old, grew up an only child in the Hunan city of Shaoyang and was raised by his grandparents because his parents worked elsewhere in China… // His one-day exhibition this Sunday, ‘Open House: Black Space/White World,’ is a collection of a dozen paintings and other works that aim to capture the poignancy of that experience.” (WSJ)

“The Fox” performed by children interlude:

“From Hu’s the Boss to Xi’s in Charge: A First Season Recap of China’s Still-New Leader.” (Pacific Standard)

“For Cash-Strapped Chinese Parents, Two Babies Are Too Many.” (Tea Leaf Nation)

“Explorer Jeff Fuchs interviews a mountain trader and guide at 4800 metres.” (the Anthill)

“In Praise of Gary Locke, the Best Ever American Ambassador to the P.R.C.” (The Atlantic)

“China’s Online Satirists Bringing an Old Tradition to a New Medium.” (The Nanfang)

The end of another China blog? (Sinolicious)