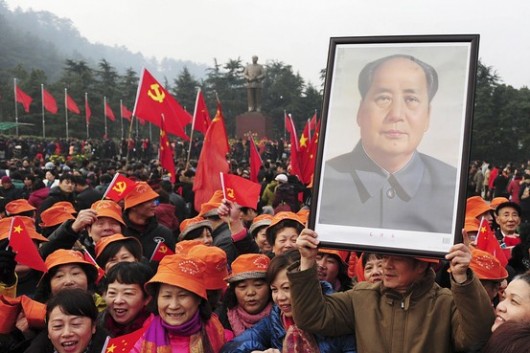 Apologies for the light posting of late, but it is the holidays. Links follow. Hope you enjoyed Mao’s birthday.

Feelings are deeply hurt. “Japanese Prime Minister Shinzo Abe visited Tokyo’s Yasukuni Shrine for war dead on Thursday, a temple seen as a symbol of Japan’s World War Two militarism, prompting a swift and sharp rebuke from China. // The first serving prime minister to visit the shrine in seven years, Abe however said he had no intention of hurting the sentiments of Japan’s neighbors.” (Reuters)

Dude… “Another foreigner has found himself in hot water, this time after making a crude statement to a TV reporter who was asking for a Christmas greeting. // The foreigner, in Wuhan, simply said ‘I love you’ followed by ‘show me your boobs,’ thus confirming every stereotype that exists of foreigners in third tier cities.” (The Nanfang)

This editorial. “There is no historical or current evidence that is convincing enough to denigrate Mao. Voices that completely deny or support him are both highly polarized. Currently, the demonizing voices are mainly from the West, which also criticizes China’s socialist system. // Those who criticize Mao do so out of political motivations rather than a desire for genuine historical debate. Those who try to undermine China’s politics in the name of debating history should be resisted by China’s mainstream society.” (Global Times)

Infant deaths. “Health authorities in China are investigating one of the nation’s biggest vaccine makers after eight infants died in the past two months following injections that were meant to immunize them against hepatitis B.” (NY Times)

But he won’t be playing. “Stephon Marbury announced his return to China for December 27th 2013 via his personal Sina Weibo account.” (Basketball Buddha)

the Beijinger editor Steven Schwankert in his own words: “People misunderstand the whole ‘dead to me’ thing. It’s about having standards. I’ve been here a long time. I’m not 26 anymore. I don’t need to put up with bad service, bad drinks, crappy atmosphere, andinconvenience. It’s like the old Yugong Yishan: people talked about it like it was Carnegie Hall. It was a fucking trailer with crap sound where the bartenders didn’t understand the concept of mixing gin with tonic water.” (Beijing Boyce)

So many imitation Maos. (Offbeat China)