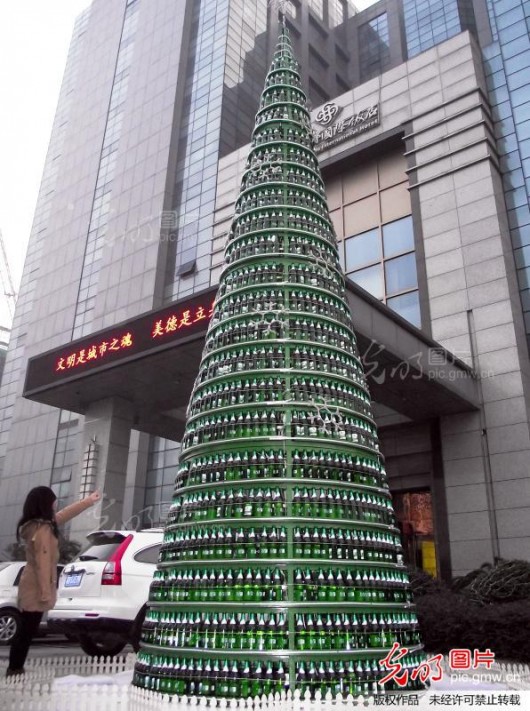 Via Shanghaiist: “This 10-meter-tall Christmas tree made up entirely of beer bottles in Changzhou, Jiangsu Province has probably captured the spirit of the holidays better than another decoration we’ve seen yet this year.”

Big news of the day. “News of Jang Song Thaek’s Thursday execution is a significant development and one that could have far-reaching consequences for Kim Jong Un’s grip on power in the medium to long term. But while official state media will continue stressing the legitimacy of Jang’s execution, the manner in which it was announced is unprecedented and will no doubt send a clear message to anyone thinking of challenging Kim’s leadership in future. How will this affect the future stability of North Korea? Should we expect imminent, high-level defections? Could this be the beginning of the end?” (NK News)

Petitioners drink pesticide in public in Beijing. “A dozen residents of a central Chinese city protested the demolition of their homes by drinking pesticide in Beijing in a desperate bid for attention that underscores the failures of a decades-old petitioning system. // The 12 survived the protest Tuesday near a historic watchtower in the heart of China’s capital after police sent them to a hospital, where they were being treated Wednesday for poisoning, said Wang Yuping, one of the residents.” (AP)

Chuckle. “Chinese authorities have told pilots who fly to Beijing they must be qualified to land their aircraft in the low visibility bought about by smog, state media said on Thursday, as the government tries to reduce flight delays due to pollution. // Beginning Jan. 1, pilots flying from the country’s 10 busiest airports into the Chinese capital must be qualified to use an instrument landing system on days when smog reduces visibility to around 400 metres (1,315 feet), the official China Daily said, citing China’s civil aviation regulator.” (Reuters)

Lang Lang speaks. “Lang Lang has been devoting much of his time recently to mentoring children, both in the U.S. and China. The concert pianist tells WSJ’s Deborah Kan why tiger parenting doesn’t work.” (WSJ)

I mean, if Kim Jong Un executed Jang for womanizing and debauchery, what the hell is he going to say to Dennis Rodman?

Shenzhen's new airport is like Beijing T3 crossed with a KTV club pic.twitter.com/96xRPuz60k

“‘Laowai Style’ – One American’s mission to share the power of comedy in China.” (SCMP)