The champs of Asia lost to the champs of South America on Saturday in the 3/4 game at the FIFA Club World Cup. It was fantastic from the get-go. Both Atletico Mineiro and Guangzhou Evergrande scored early (Atletico’s Diego Tardelli, 2′; Guangzhou’s Muriqui, 9′) before Guangzhou took the lead on a 15th minute penalty. But then, in first-half extra time, Atletico’s Ronaldinho — the Ronaldinho, known as “Small Lo” in China (not to be confused with “Big Lo,” i.e. [now-fat] Ronaldo, or “C Lo,” who is Cristiano Ronaldo) — did this:

But then the dude would be sent off in the second half with a red card for kicking a Guangzhou player straight in the knee. I mean, come on: 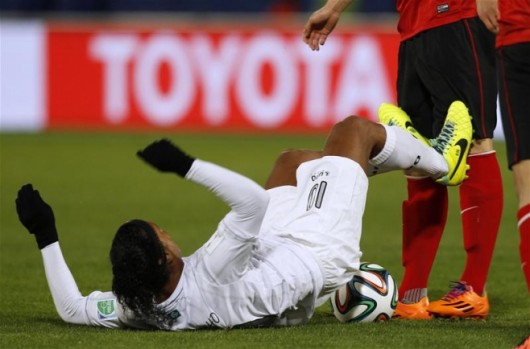 Just as the game appeared headed for extra time, Atletico’s Luan broke into the Guangzhou backfield and had an open run at the goalkeeper. He slid through a professional shot for the final dagger.

Some say Luan was offsides, but it was probably too close to call: 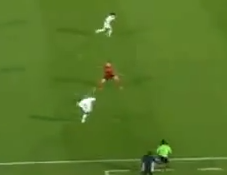