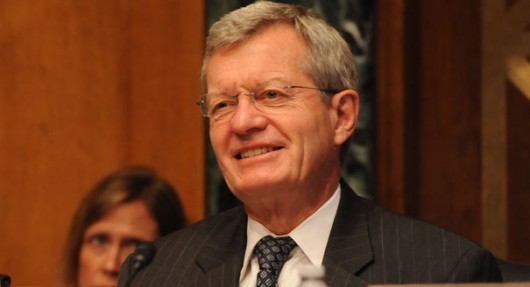 As you’ve surely heard, president Barack Obama has nominated Democratic Senator Max Baucus from Montana as the next US ambassador to China. Baucus appears to have support from both sides of the aisle and is expected to be confirmed soon.

What do we know about the man? The profiles and commentaries have already begun to roll out (“strange choice,” “solid China credentials“… “clever political ploy“). Apparently the multinational business community in China is especially aware of Baucus’s work, and presumably approve. But we’ll let policy wonks sort out what this means for US-China relations, or how Baucus is expected to handle a host of sensitive issues from journalist visas to South China Sea sovereignty and space.

We’re going to read the tea leaves in a slightly different way. Here, from a Wall Street Journal article:

Mr. Baucus has traveled regularly to the country, visiting the countryside as well as big cities like Beijing. His favorite restaurant there is Blue Frog Bar & Grill, a small chain popular with expatriates that was founded by a Montana native.

So, Baucus is a man who is not afraid of making the safe choice, a man loyal to his friends and set in his ways, who prefers to steer clear of bold statements that might elicit the ire of a more passionate minority.

Either that or he hasn’t been to Beijing since 2011.

(We kid: Blue Frog remains first-class. Baucus is going to be upset to learn that you now have to buy a drink to get the second burger for free on Mondays though.