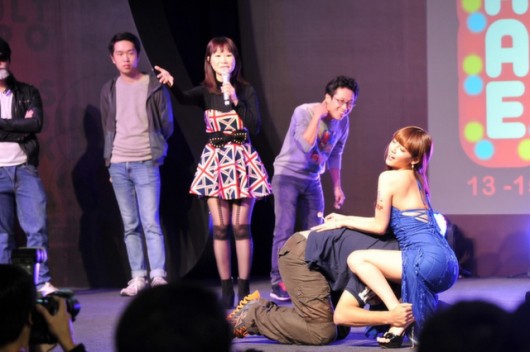 Asia Adult Expo 2013 in Macau is weird, via Shanghaiist

At the Exit-Entry Bureau this afternoon, one of the officers behind the table almost got into a fight with another officer. They moved to the back, where there was audible shouting behind a closed door, and the sound of a slap. Anger does weird things to people, divesting them of shame. Links time.

Volatile, much? “The world’s largest Bitcoin exchange by transaction volume, BTC China, has announced on its official Sina Weibo account it will no longer accept deposits in its home currency, the renminbi. The news has sent the price of bitcoin tumbling $200 to less than $500 in under 24 hours.” (Tech in Asia)

A profile of Bill Porter (Red Pine). “It’s a Sunday afternoon and Beijing’s biggest bookstore is preparing for a major event: the launch of a new book by a bestselling American author, who will be on hand for the occasion. Six-foot banners on the sidewalk out front announce the talk, along with posters in the windows and a big display of books in the foyer of the 170,000-square-foot store. Up on the sixth floor, a conference room filled with sixty people quietly awaits….Bill Porter.” (Ian Johnson, NY Review of Books)

Save the tigers? “A former Deutsche Bank AG (DBK) executive’s wife said he used their animal conservation charity to hide assets while she spent the group’s money on furniture and expensive meals. // Stuart Bray and his wife, Li Quan, are fighting over about 50 million pounds ($81 million) of assets held by Save China’s Tigers, which they founded in 2000, in their divorce case in London. // The former banker used a trust connected to the charity as ‘shelter’ for their personal wealth, Li said at a hearing in the case this morning. Bray, who left the German lender in 2001, said outside court that ‘what she is now saying is untrue.’ Lawyers representing the charity declined to comment.” (Bloomberg)

“Marxism as guide.” “Journalism in China is considered by many as a frustrating profession. From poor dating prospects to physical threats from local thugs, reporters face a number of challenging obstacles. The latest, however, comes from the top, as new regulations from the national media watchdog demand journalists into weekly training to qualify for their profession.” (Global Times)

Oops. “The futuristic new Shenzhen Bao’an airport terminal 3, open for less than a month, has already hit turbulence. Water leaks have sprung up at several places in the new terminal after recent heavy rains.” (SCMP)

“Innovative protest for equality.” “The middle-aged farming women forming a human pyramid in front of the Zhejiang Provincial People’s Government headquarters in Hangzhou last week constituted a small protest that pointed to a big problem: persistent economic and political discrimination against women in rural China, they said.” (Sinosphere)

China still buying US debt. “China scooped up more Treasury debt in October than any other foreign investor, a sign recent U.S. fiscal troubles haven’t tainted the Treasury bond market’s status as a global safe harbor. // China boosted its Treasury debt holdings by $10.7 billion in October to $1.3045 trillion, according to the latest monthly capital flows data released by the Treasury Department on Monday. Foreign investors overall added $24.4 billion in Treasury debt holdings in October. China primarily bought T-bills due in one year or less, known as T-bills with $8.4 billion added in October.” (WSJ)

Grimace. “A Chinese woman has had a 4.7 inch bamboo stick stuck in her face for eight months without realising. // Doctors were amazed when they did a scan of 61-year-old Fu Jinfeng’s head and found the stick lodged through her cheek and upper jaw. // The woman’s family had taken her to the Xiang Ya Hospital in Changsha, Hunan Province in early December because she could not fully open her mouth to eat and an eight-month-old wound had not yet healed.” (Daily Mail)

“Gan Lulu is back and bathing in front of a live audience near you [NSFWish].” (Shanghaiist)

Via Shanghaiist, “Man has severed hand attached to ankle to keep it alive”: 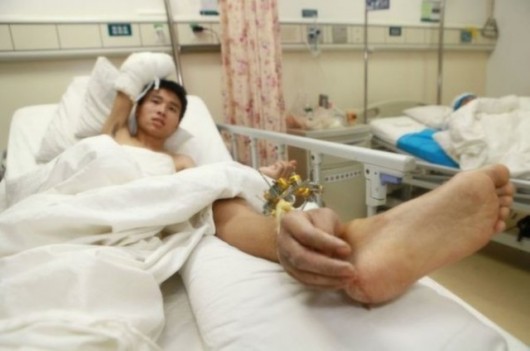