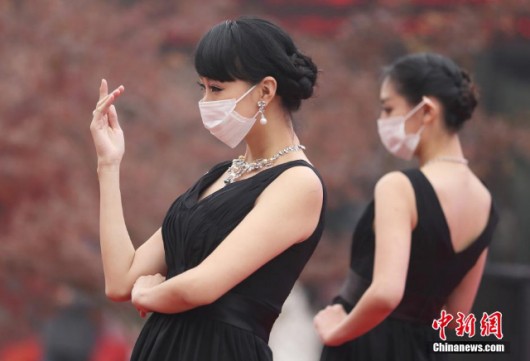 Models in masks in Nanjing due to pollution, via Shanghaiist

An untimely computer failure meant no Friday links, some of which you’ll get here instead.

Words for Chinese students. “Arriving midday in Beijing, Biden paid a visit to the U.S. Embassy, where he surprised Chinese citizens waiting to get visitor visas processed in the embassy’s consular section. Thanking a group of mostly young people for wanting to visit the U.S., Biden said he hoped they would learn during their visit that ‘innovation can only occur where you can breathe free.’ // ‘Children in America are rewarded — not punished — for challenging the status quo,” Biden said. ‘The only way you make something totally new is to break the mold of what was old.’” (AP)

And then? “Vice President Joseph R. Biden Jr. sharply criticized the Chinese government’s crackdown on the foreign press, telling an audience of American business people Thursday that the United States had ‘profound disagreements’ with its ‘treatment of U.S. journalists.’” (NY Times)

Let’s all, again, laugh at the Maoists. “With the death of Nelson Mandela, the internationally beloved former president of South Africa, on December 5, 2013, that political tilt was on full display as Maoist and nationalistic left-wing Weibo users took the opportunity to praise Chinese communist revolutionary and Mandela inspiration Mao Zedong and, surprisingly, criticize state-controlled media outlets for giving too many compliments to Mandela.” (Global Voices)

Intrigue to the ongoing Bloomberg story. “The spouse of former star Bloomberg China reporter Michael Forsythe, Leta Hong Fincher, sent tweets late Friday night that suggested she and her husband are being pressured by lawyers representing his former employer. // ‘Has anyone heard of a spouse being sued for breaching a company’s confidentiality agreement when the spouse never worked for that company?’ // In a tweet minutes later, she added, ‘Can anyone recommend a feminist lawyer in Hong Kong?’ By Saturday morning, Hong Fincher’s tweets had been deleted.” (Buzzfeed)

Sanlitun expats, watch out. “Foreign residents of China, have your passports at the ready. The Beijing Times reports that police in Sanlitun are launching a crackdown on ‘illegal foreigners’ which will include 24 hour patrols of the popular shopping and drinking district. // 60 cops have reportedly been seconded to the foreigner hassling detail, which will patrol the community 24 hours a day.” (That’s Online)

Bitcoin recoil. “China’s government banned financial institutions from trading in bitcoin on Thursday, in what analysts said was a restrained first step towards regulating the digital currency that has exploded in popularity in China and soared in value in recent months. // A statement by the central bank and four other agencies said that, while the computer-generated currency does not yet pose a threat to China’s financial system, it carries risks. It did not, however, curtail the use of bitcoin by individuals.” (Reuters)

Believe it or not (probably not). “Retired Chinese domestic security Chief Zhou Yongkang (周永康) was involved in a plan to assassinate Chinese Communist Party General Secretary Xi Jinping (習近平) in order to take over the country, New York-based Mingjing News reported on Dec. 5. // Zhou, who had already been restricted for his alleged involvement in numerous corruption scandals, will likely face serious consequences, according to the report.” (The China Post)

Smog affecting Shanghai should be swept away as a cold front pushes through the city. http://t.co/F1NJbr8pjX pic.twitter.com/qBgpGyHtL9

Migrant workers in Beijing trying to get movie roles interlude, via ChinaFile:

“Will China Shut Out the Foreign Press?” (ChinaFile)

“Life After Dark: Exploits at a Guiyang gay bar.” (Sasha Draggeim, the Anthill)

“The One Thing Jackie Chan and Ai Weiwei (Almost) Have in Common.” (Jing Daily)

Welcome back, The Box, a fine Beijing bar. (Beijing Boyce)

“Generous Tianjin parents give 99 rolls of uncut bills worth 10 million yuan as part of the dowry to their daughter ahead of lavish wedding.” (Hug China) 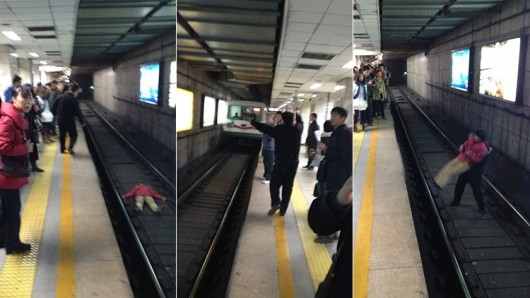