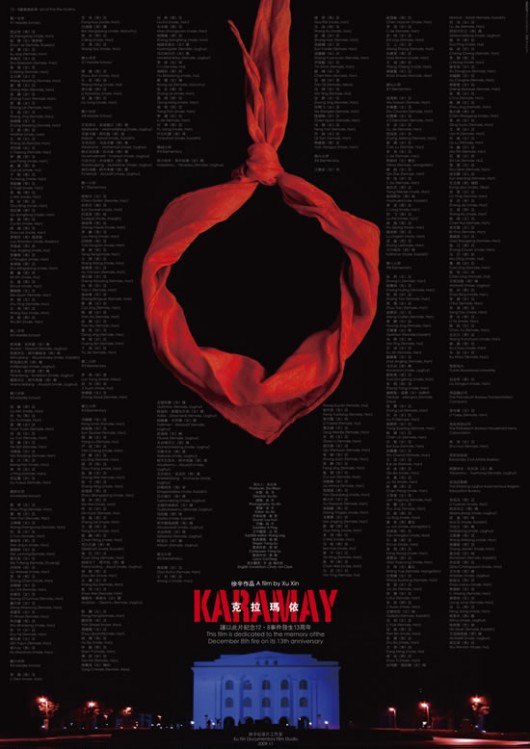 Xu Xin’s monumental 2007 2010* film, Karamay (below, with English subtitles), is a meditation on the relationship humans have to failures within Modernist political projects in our current historical moment. Using long-takes and repetitive framing, Xu Xin draws out the long duration of trauma and feelings of injustice following a horrific fire that killed hundreds of children in 1994. With the exception of a minority of Uyghurs and Kazakhs, the majority of Mandarin speakers featured in this award-winning 356-minute film came from elsewhere.

Their families arrived in Xinjiang in the 1960s to work in the oil fields and protect the Chinese frontier. Trading rural social networks for the future benefits of membership in the industrial proletariat, these parents placed their lives in the hands of the Party. They committed themselves to a national-communist project thousands of miles from their natal homes; they developed skills for coping with displacement; they disciplined their bodies and the bodies of their children as biopolitical weapons in a war with nature. Out on the frontier, rituals of patriotic citizenship took on an intensified significance; these pioneering settlers were on the front lines of the nation.

If their sacrifice was not completely recognized in the central nodes of Chinese society, it was nevertheless deeply felt at its margins. Although times were extremely tough in Xinjiang, Maoist biopolitics – thought broadly as a system for managing the health and welfare of a population conceptualized as a social whole – enabled Han settlers to realize a poor, yet durable, existence. Xinjiang was not fraught with some of the insecurities which affected other parts of China during the Great Leap Forward and Cultural Revolution. Relative to Beijing, Xinjiang was a stable place for settlers (less so for indigenous minorities under the new regime); rituals of sacrifice and interdependence that came with the infrastructure of rationing and cooperative social organization were largely effective in maintaining a sense of being well.

Yet as the vitality of the Maoist social-national project dissipated in Xinjiang during the Dengist Reform era, some of these same people have been rendered superfluous, caught up in forces much larger than themselves and the things they were promised. When 288 children in the city of Karamay1 died in a horrific fire in 1994, unaffected officials and citizens moved on with economic redevelopment – apathetic toward the uneven distribution of well-being, social justice, and prosperity. In its late-Socialist iteration, the ethos of their work unit – the petroleum company PetroChina – and its subsidiary support units no longer seems to account for their well-being. The parents Xu Xin interviewed in this film feel stuck, unable to move with flows of power and wealth that buoyed the futures of so many Reform-era Chinese. Yet more than an exposé of the tragedy of loved-ones lost, this film is also about the corporeal embodiment of social abandonment and failure.

In Karamay, people find themselves unable to act or react to their social world in normalized ways. As the bodies of their children and, likewise, their kinship family more generally, are rendered disposable, the parents in Karamay reel between anger and defeat. Although these feelings are certainly not evenly distributed across time-space among “common people” in Northwest China (many have found ways to detach from Maoist comportments and “move on” in the new political economy – see Cliff 2010), in the sample population of the film we see a qualitative, palpable presence of the cycle of defeat: first fingers are pointed, fists clenched, palms smacked, then heads buried in hands and, finally, almost universally, a vacant gaze disengaged both with the world of the film and, the viewer is invited to extrapolate, the broader social world.

Writing in response to Xu Xin’s film and the way certain aspects of the Chinese world frequently disappear from view, the critic Ni Ba had this to say (emphasis mine):

When I asked a few of my friends if the name Karamay made any impression on them, a few friends said, “is Karamay a country?” One friend said Karamay is a desert, still another said Karamay is a person’s name. When I spoke to them later and told them about the great fire in 1994, they said: “Oh yeah!” They said that now they could recall it, vaguely…. Perhaps this is precisely our society’s present condition. Development as the imperative task, stability as the paramount responsibility, the domination of patriotism which parrots the greatness of the motherland, have all been powerful ideals for the duration of our great journey to revival. People with or without intention have chosen to forget about the way the lives of others confront the real and the future. Yet hearing the immediacy with which many regular people in Karamay know the way their children were blocked in the course of the events, and knowing that according to the official rhetoric better times should have come to that place, I can’t help but wonder what kind of success is bound up in [our economic development].

1 Karamay (Ch: Kèlāmǎyī; En: Black Oil) is historically a Mongol, Kazakh, and Uyghur city in what is today Northern Xinjiang. Due to its vast oil resources, over the past few decades it has become a 75 percent Han city dominated by state-owned enterprises. According to a 2011 list of richest cities, Karamay is now one of the wealthiest per-capita cities in China.

Part 2 of this six-hour documentary is here

4 Responses to “Dispatches From Xinjiang: Xu Xin’s “Karamay” And Life In The New Economy”

Leave a Reply to Josh