The most recent episode of the CBS comedy How I Met Your Mother was panned by some fans as tasteless and racist when it depicted three of the shows protagonists what critics characterized as “Yellowface.”

I used to watch @HowIMetMother but I now refuse to and hope they apologize for yellowface. #HowIMetYourRacism
— Suey Park (@suey_park) January 15, 2014

I don’t think it deserved all the vitriol. First of all, let me first say that as a person of color (half-Asian), I cannot be racist. It’s a fact. Now that that’s done, let me lay out a few reasons why I think the critiques of HIMYM are a little too venomous.

Context is everything
One of the reasons that blackface/yellowface is an important issue is practical — having white actors portray Asians is a way to disenfranchise these performers in the media. Time writer Kai Ma said this precisely:

“What has always been so disturbing about yellowface, blackface, brownface, and redface, is how far the industry is willing to go to not employ people of color. Instead of hiring an Asian-American actor to portray an experience written by an Asian American writer — an experience that can certainly include a penchant for kung fu — television has historically, aggressively, employed white artists to write about and portray non-white people.”

Which is true, and if you didn’t watch the episode, is a totally reasonable claim to make. But the whole conceit of the slap training montage in question was that it was made up. The roles were played by the show’s protagonists because they were supposed to be the show’s protagonists, and they carried their personalities and in-show stories with them. The actual Asian people in the episode (and there were a number) all acquitted themselves perfectly well.

What is yellowface here?
So we’ve established that the roles the “yellowface” characters were playing weren’t those of Asian people. But what exactly did they do that got people so fired up? 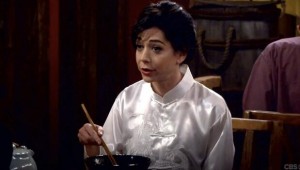 Okay, so she’s wearing a kimono. But that seems to be it? Hmm… 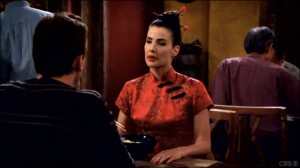 Okay, well this is a bit easier. Her face isn’t yellow, but she’s got those chopstick things AND a kimono. 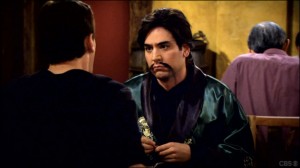 FU MANCHU! I FOUND IT. EXTRA CRISPY RACISM! What…who is Fu Manchu? Oh wait, you didn’t grow up watching Boris Karloff’s performance in The Mask of Fu Manchu? Oh well, you know it’s this funny beard thing that means something.

Oppression is about power and history — yellowface is not blackface 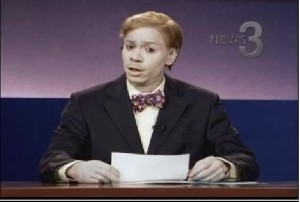 When Dave Chappelle puts on whiteface (real, actual whiteface) and makes fun of white stereotypes, we laugh. A black person can call a white person a “honky” or “cracker”, it is comedic rather than offensive. And yet I cannot even mention the slur a white person would use.

I am not a culture warrior upset about this. I accept that this is the way the world works.

I am try to critically examine the claim that one cannot portray people of other races on film. The common cultural consensus seems to be that one can, as long as it is directed towards privileged people. Can we say that Asian-Americans today speak from the same place of oppression as black Americans or Latinos do? Is it a relative thing? Could a black person do yellowface? Could a Native American? The knots of power and race get very tangled here and make this a complex issue.

Being focused only on racial performance is distracting
If this episode had been tweaked to include Asian actors instead of white ones, I doubt that we’d be hearing flame wars about it. At least it wouldn’t have a catchy #yellowface hashtag. I think that’s a problem. We should be angry about performances that exacerbate racial stereotypes, but by focusing solely on Ted’s Fu Manchu mustache we run the risk of failing to observe racism in its many, many forms.

In the end, I’m inclined to excuse lazy wardrobe choices and give the show’s creator Carter Bay the benefit of the doubt:

With Monday’s episode, we set out to make a silly and unabashedly immature homage to Kung Fu movies, a genre we’ve always loved.

So everybody calm down. Let’s back down to yellow alert.

7 Responses to “In (Sort of) Defense of Yellowface”