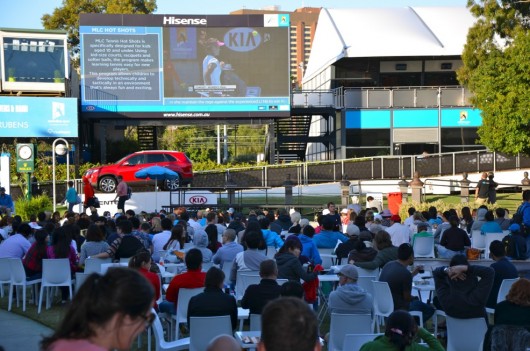 In last year’s Australian Open Final, Li Na repeatedly halted play for the eager crowd of tennis aficionados. Not that they minded. Alongside her game, she endeared herself to the tennis public following a couple of ankle rolls, a clutzy head bang, and her comical approach to a concussion test.

China, your girl is the crowd favourite.

I saw this firsthand yesterday on the Rod Laver Arena concourse as Li Na won her first Australian Open title and her second career Grand Slam, beating 20th-ranked Dominika Cibulkova 7-6 (3), 6-0. (Li moved up one spot in the world rankings as a result, to No. 3.) But the crowd’s admiration was politely expressed, with equal appreciation for Cibulkova, who gutsed out a tight first set playing in her maiden Slam final.

The healthy bunch of Chinese supporters watching in the public “Garden Square” seemed to reflect the stoic-ness of Li’s exterior: not panicking during the tense moments, not overzealous when she cruised toward victory in the second set.

The tennis public in Melbourne loves Li as much for her impressive groundstrokes as her quirky post-match interviews where she regularly details her conflicts with her husband and coach. Luckily, we were treated to a happy speech yesterday, which some observers have called the “best acceptance speech ever.”

She thanked her agent for “make me rich,” but most of her punch lines were reserved for her husband, Jiang Shan (Dennis), who was sporting a Crown Casino baseball cap (perhaps he’ll help spend the $2.31 million purse his wife just received for winning the title).

“Now, of course, my husband, you’re famous in China,” Li said into the dual microphones at centre court. “Thanks him with everything, travelling with me as my hitting partner. (He) fixes my drink, fixes my racquet… So thanks a lot, you’re a nice guy.

The couple will take time to celebrate their 8th wedding anniversary on Monday. It should be civil.

Last year, Li Na flirted with the idea of retirement before refocusing on the sport that netted her the 2011 French Open. When she finally does retire, if she isn’t awarded her own sitcom starring alongside Tina Fey, I suppose a cameo on Saturday Night Live should suffice.