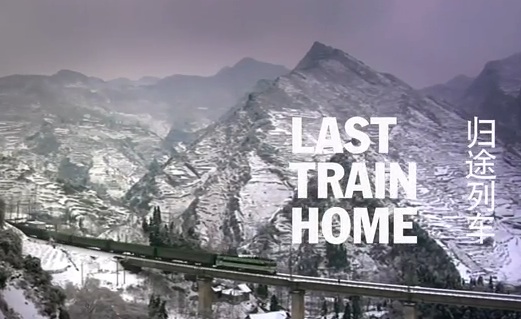 I could tell you how much I enjoyed this movie, directed by Lixin Fan and produced by the same company behind the China documentaries Up the Yangtze and China Heavyweight, and how highly I recommend it. Instead, please allow me to share the beginning of a 19,000-word ekphrasis I wrote a few years back, for the hell of it, because I thought this film deserved it.

This film is dedicated to the migrant workers and their families

OPENING CREDITS. Zeitgeist Films, the red Z flying into place. Eye Steel Film, the letters chugging across a backlit scrim the color of the sun. Pitter-patter of rain. “TELEFILM CANADA and the ROGERS GROUP OF FUNDS through the THEATRICAL DOCUMENTARY PROGRAM present.”

FADE IN. A policeman bundled in black occupies the public traffic lane. He walks toward the camera, which is perched high and panning left, and quickly we understand that the emptiness on the right of our screen is a foil for the congestion on the left, the serried bodies so tightly packed that we lose the human face, the human arm, the leg, the semblance of movement: we see only a concourse of black-haired beings corralled by a vertical line of officers as barricade. There is a buzz of flesh and blood, a swelling commotion of such bestial strain that the sound of a steady downpour could well be part and parcel of this manmade scene. We see a scattering of umbrellas in the colors of neon, sky blue, army green, burgundy, yellow, turquoise, teal, light purple, mahogany, orange – and as the camera pans, they proliferate until our screen is filled with these varicolored mushrooms abloom in this soil of humanity.

At ground level, men and women rush forward amid an expanding hiss of babble. They flow with the tide, and divested of agency, individuals are freed from obligations of human compassion, sympathy, and courtesy. Uniformed men with hard-billed caps steer traffic best they can, but they are outnumbered. The energy is ramifying from some heart of the matter, the heart which is this: the primal urge to answer the call of home. We zoom in on a man being tugged from behind by someone who does not want to lose him. A woman emits a screak. A cop says into a megaphone, “Be patient, don’t crowd.”

In the bowels of the station, our vision is pointed down a concrete gully daubed with the pale glow of cylindrical fluorescent lights. Plaster peels off the walls. There are over 130 million migrant workers in China. Travelers appear from the vanishing point hauling roller suitcases, handbags, duffel bags, buckets, makeshift carts – and their weighty footsteps, their burdens, their haste. They go home only once a year, during Chinese New Year. They jog, fast-walk, and now they are rounding the corner. This is the world’s largest human migration. Cut to station platform: a man cranes his neck to make space for an oversized blue bag of woven plastic, possibly containing everything he owns in life. We see the side of the train, already in motion. The faces inside are a blur. A bright light – the camera’s – reflects off the windows, blinking in synchrony with the clank of the train’s metal wheels. The clanks grow distant, for we have remained on the platform while the locomotive slips into the night. On the track a woman in red, barely visible, totters toward the receding train. A whistle sounds, the mistuned French horn, distant and muted. The screen cuts to black, except these words, in English and Chinese:

Winter 2006. Here is the postcard of a modern Chinese city: a layer of buildings, a mildewed sheet of fog, some construction cranes. Arrayed in two dimensions. At the bottom: white and dull-pink low-rises; slightly above: a vanilla six-story building, possibly a factory; higher: pink apartments – dormitories? In the middle ground, all is hazy, implying distance. There is the mound of a hill. Higher up, hazier still, is the outline of a skyscraper, one side rounded off like a half-licked Popsicle. The top third is simply a swath of gray-red, Teflon-soot, particulates of orange, the hue of cancer. It is the sky. We hear the tittering of a jackhammer, that metal woodpecker. Guangzhou, Guangdong Province.

Trucks and vans lumber down Guangzhou’s congested streets, flanked by banners and ads for restaurants, hotels, spas. Along narrower roads, the soundtrack of commerce is the voice of the solitary huckster, the stare of a wheeler/dealer, a vendor with a good price, a better price, the best price. Toddlers sit atop merchandise – navy jeans, in this scene – while women affix price tags to the products. A bare-chested man carries a box over his back, his hands gripping a white cable tie. The packages make a thud when they are thrown atop other boxes, which all read: “C/NO: MADE IN CHINA.”

Inside the six-story factory, delicate hands feed cloth and linen through hissing, rusted sewing machines. One thinks: prehensile creatures are not meant to perform this act, yet we should not understate the importance of the human touch, even on machines and their mechanical lockstitches, for just look at the selvage on the bottom of your jeans, or embroidery on cotton T-shirts. Look now, go do it – trace one of the laces, run your fingers over a seam. Linger a moment.

A man with an awkwardly large pair of black scissors snips at a delicate, flower-embroidered fabric. This is Zhang Changhua. He is meticulous, but he seems miscast at his humble workstation, where the aural accompaniment is that of sharp needles greedily nibbling at their fare. He would be better forging steel, manning coal-powered kilns, hammering iron to the soundtrack of a brassy orchestra. His wife is Chen Suqin. She rises from her sewing machine to tear a piece of saran wrap. She unspools a length of string by tugging on it with quick, succinct movements. Meanwhile, a young worker maneuvers an electrical steam iron to smooth out a dark piece of cloth.

When work ends, the couple retires to their dorm, where the concrete walls are smudged and the floor is imprinted with the muddy outline of a hundred different shoes. Grit seeps from these hollow halls inside the bedrooms. Suqin, wearing a burgundy leather jacket, carries two buckets of water into the bathroom. Changhua joins, and together they wring clothes with soap water over a bucket.

He stands over her and looks away.

After she is done, she soaks her feet in a bucket of hot water, then dries them with a rag kept behind a curtain.

“Finished?” he says, walking in.

“Yes. Thanks.” She hands him the rag and slides into bed and out of view. He returns the rag to the windowsill before toting the bucket of water to the bathroom. He returns, slips the empty bucket under the bed, and draws a cloth curtain over the top half of the doorway. His silhouette, magnified by the physics of light, searches for its place on the thin mattress.