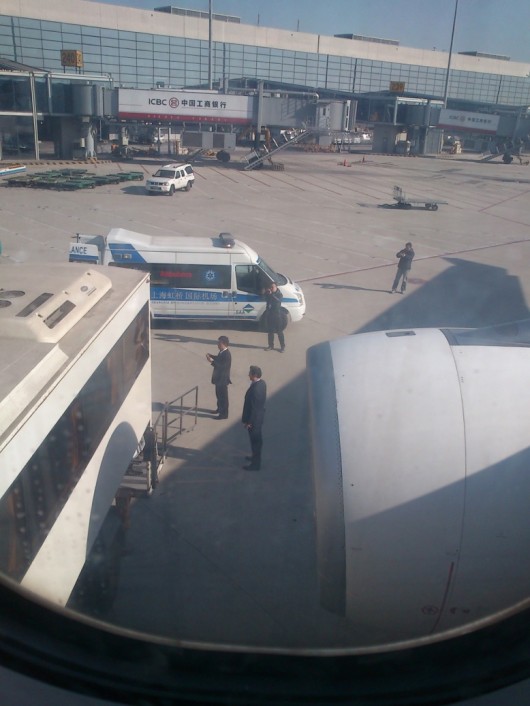 It started with an early-morning flight out of Shanghai. I was headed back to Beijing after a few days of work, and while the departure time of 7:30 am was excruciatingly early, I was comforted by the fact that I had scored an economy-priced first-class seat.

Everything went smoothly at the start – more than smoothly, in fact, since I luxuriated in a huge seat while wearing slippers, sipped freshly brewed Americano from fine china, and snacked from a bowl of warm nuts, all before take-off. I settled in, ready to fully enjoy the two-hour journey.

After we had reached altitude and the flight attendants brought me my breakfast, complete with a white tray-table cloth and freshly squeezed OJ, the captain got on the mic to make an announcement.

“Ladies and gentlemen, may I have your attention please. One of our passengers is in need of emergency medical assistance. If there are any doctors onboard, please make yourselves known to the flight attendants. Thank you.”

It was the kind of announcement I had only heard in the movies. “Was this really how airlines dealt with medical emergencies?” I thought. Not being a doctor myself, I continued to enjoy my herb omelet.

My meal was soon put on permanent hold, however, when I saw a man being carried up the aisle by two male passengers and two flight attendants, the latter shuffling and struggling in their heels in the tight space. They placed the clearly unconscious man on the seat diagonally behind me, so that I had a perfect view of the situation.

Another man in a plaid shirt and sweater vest, presumably a doctor who had offered his services, was now lifting the limp hand of the unconscious man to check his pulse, listening for his breath, and looking in his eyes. One of the flight attendants arrived with a blood pressure meter. Whatever reading it registered, it couldn’t have been good, as the doctor suddenly stood up and began giving the man strong and rhythmic chest pumps. The doctor wasn’t a small man, and every time he pumped, pushing his weight onto his palms, the unconscious man let out a sickening groan like he might puke up his lungs. This went on for nearly 20 minutes.

At one point, a flight attendant came over and asked me, “Are you finished with your meal? Can I get you anything else?” She clearly tried to maintain the illusion of the first-class experience in spite of the man dying behind me.

“I don’t know,” she confided, her face suddenly betraying the seriousness of the situation.

Soon after the captain got on the PA once again: “Ladies and gentlemen, one of our passengers is having a medical emergency and we must return to Shanghai to ensure he gets proper treatment. We apologize for any inconvenience this may cause.”

As the plane turned, I looked back to see what was happening. The doctor was now trying to affix a mask connected to an oxygen tank around the man’s face. He was having some difficulty as the man lay heavy and unresponsive on the seat, his eyes closed and his skin a sickly gray-purple. The flight attendants stood slightly off to the side, looking tense and worried.

Less than an hour later we made it back to Shanghai and, miraculously, the man seemed to still be alive – maybe even better, as he responded to the doctor’s questions with a slight nod of the head. After the plane stopped, a team of EMS workers ran onboard and got to work checking the man’s vitals and talking to the passenger-doctor. A few Air China staff also came onboard to investigate, standing around looking important.

We all waited for a special emergency vehicle with a gurney to position itself alongside the plane door to carry the man to a waiting ambulance. Meanwhile, other passengers became curious, and snuck up to the first/economy-class divider to check things out. At the same time, more Air China staff began peering over the shoulders of the EMS workers.

Of course, this being 2014, people couldn’t just look — they had to record it. Pics or it didn’t happen, as they say. Some passengers in economy thrust their phones through the divider, making sure they were high enough to avoid shoulders or heads to get a good shot of the barely conscious man, who had probably just had a heart attack. To my relief, the flight attendants politely sent them back to their seats and closed the curtains.

But now the Air China staff were also holding up phones and taking pictures, checking to make sure they had gotten a good shot, then going in for another. I watched, uncomprehending, as everyone around me (except the EMS staff, who were busy saving a man’s life) began taking pictures, including but not limited to other first-class passengers, flight attendants, Air China staff, the men working on the emergency vehicle, and, out on the tarmac, the airport staff who were overseeing the arrival of the ambulance and safe passage of the suffering passenger.

Has it really become socially acceptable to record others in their most tragic, most vulnerable, weakest point of their existence? As a man suffered, potentially near death, everyone around him tried capturing the moment for eternity, not to mention social media.

Once the man was safely transferred to an ambulance, our plane turned around and ready for a second takeoff. This time there were no offers of freshly squeezed juice or brewed coffee. The flight attendants stayed huddled near the exit, perhaps recovering from what they had witnessed. Either that or placing filters on their photos and creating collages to post online.

One Response to “Pics Or It Didn’t Happen: An Air China Passenger Has A Heart Attack For The Cameras”