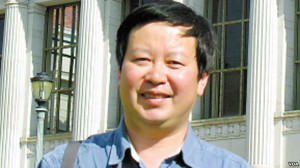 Xia Yeliang, formerly a dissident professor at Peking University, announced on Monday that he will become a visiting fellow at the Cato Institute, a libertarian thinktank partially funded by the conservative Koch brothers.

Xia, an economist, was dismissed in October in 2013 in what the New York Times called “part of a wide crackdown on scholars, lawyers and writers who have discussed democracy and freedom.” Before I move on from his dismissal, it’s worth mentioning that Eric Fish, writing for the Atlantic, actually talked to students and professors at Peking University who criticized Xia for being a poor teacher didn’t “care about teaching at all.”

Regardless, Xia is part of a larger story about the lives of dissidents after they lose their position of influence in China. Instead of working to influence things in China, they join conservative organizations in the United States that co-opt them as part of an anti-China agenda.

It happened with Chen Guancheng, who left China only to end up at the Witherspoon Institute where he regularly forecasts China’s doom. It happened to Chai Ling, a now widely discredited figure of the Tiananmen student movement, who saw Christ and pillories China in Congressional hearings like “China’s One-Child Policy: The Government’s Massive Crime Against Women and Unborn Babies.” It happens to so many dissidents.

I understand why they do it. You can say bad things about China in China and go to jail, or you can have conservatives pay you enormous amounts of money to do it in the US. Regardless it causes these activists to lose credibility as agents of change in China, and the impact they can have from the States is minimal.

“If you want institutional change, someone must be willing to stand out to make a contribution, even sacrifice.”

Let’s see the sacrifice he can make from his desk at Cato.