Consider the view that greets the Mao Zedong hanging from Tiananmen Gate each morning in Beijing. On a clear day, the Great Helmsman sees something like this:

With the exception of his own mausoleum going up in the middle of Tiananmen Square, the scene is little changed from when Mao reviewed Red Guards at the height of his power. The architect of Chinese socialism can remain blissfully ignorant of the changes being wrought upon his revolutionary utopia – save that Audis and BMWs seem to be crowding out the familiar Red Flag limos on Chang’an Avenue. Would Mao be aghast if he discovered that foreigners had re-colonized China with lattes and handbags while less-scrupulous locals gleefully enriched themselves by displacing the poor to sell each other overpriced houses? Probably. But in Tiananmen Square, as real Mao lies embalmed in a crystal coffin, portraiture Mao lacks the peripheral vision to see all that counter-revolutionary hustle.

Not so in the Changsha’s Better Life Department Store, where someone has seen fit to hang Mao’s portrait where it daily must view the consumerist spectacle of the ground floor cosmetics and wristwatch kiosks: 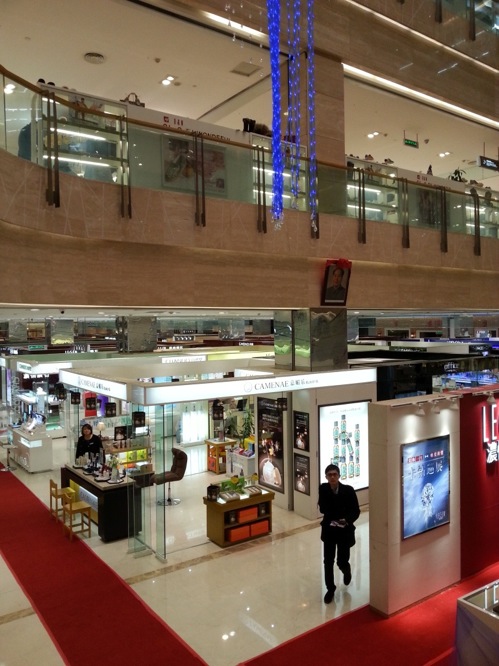 Sure, Hunan-based Better Life probably hung the portrait simply out of respect for their native son. But I would also believe it if someone told me that Better Life’s CEO is a dyed-in-the-wool capitalist who always believed Mao’s communist fantasies were folly and, now swollen with riches from selling jewelry and clothes to China’s ovine masses, has decided to take a victory lap by hanging a portrait where Mao’s weary, unblinking stare will forever be greeted by the former proletariat scrambling for earthly pleasures on the ruins of his communes. 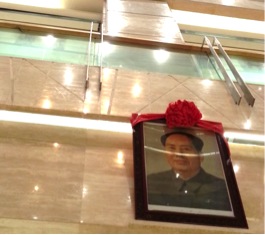 Actually I might also believe the opposite scenario, in which Better Life contained a closeted leftist who – full of self-loathing for having joined those who walk the capitalist road – has assaulted the headquarters from within by hanging the stern portrait of Mao to watch in silent reproach of China’s wayward lambs. In this case the effect could be accentuated if our leftist diehard added a tear in the corner of Mao’s eye. It could recall the crying American Indian from those Keep America Beautiful commercials, except rather than litter, it will be the sight of urbane Chinese browsing skin-whitening creams that bring tears to Mao’s ruddy cheeks. 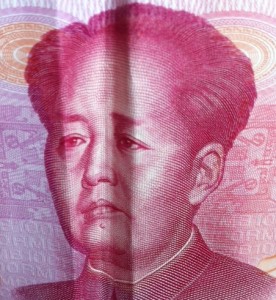 Warner Brown studies real estate trends in Shanghai, but personality tests say he should have been a film critic. His previous article for Beijing Cream was about a Chinese version of The Wolf of Wall Street.