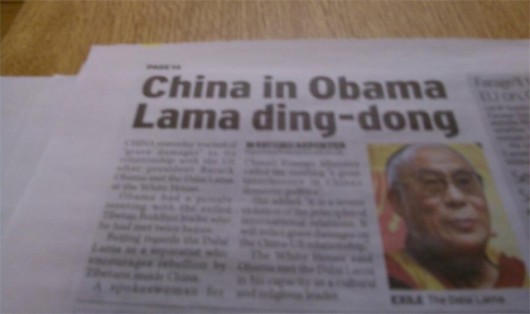 Monday links day. Let this be the first of several reminders that we’ll be seeking poems until March 1, i.e. this Saturday. Read on.

Dalai Lama and China in their eternal dance. “China on Saturday accused the United States of meddling in its domestic affairs after President Barack Obama met the Dalai Lama at the White House, and said it is up to Washington to take steps to avoid further damaging ties.” (AFP)

Only because they couldn’t do it themselves. “One of China’s top journalists and TV anchors, Chai Jing, has caused a stir online after she gave birth in the US, with some netizens calling her a ‘traitor’ or a ‘liberal hypocrisy.’ // After pictures of Chai holding a newborn baby at an airport were published online, reports surfaced that she had given birth to a daughter in the US in October 2013. Obviously, the benefit is that the child becomes US citizen.” (Global Voices)

China has another Guinness record. “A Chinese manufacturer has set the record for the world’s thinnest latex condom with one measuring 0.036 millimetres, Guinness World Records said on Thursday.” (AFP)

“Gulag Narrative.” “Because the Gulag Narrative has the effect of focusing our attention on prisons and re-education camps, it has obscured much of what could be said about corrections in China. The secretiveness that still surrounds the PRC correctional system no doubt contributes to this focus. Yet, even though it is extremely difficult to access information about China’s corrections system, much of the Chinese literature on corrections is now in the public domain, waiting to be used.” (The China Story)

Mo Yan back in news. “At his press conference yesterday in Istanbul after a five-day stay in the city, Mo Yan called for the governments of China and Turkey to actively promote literary translation.” (Altaic Storytelling)

On railroads. “My father rode the Xinning Railway once. He was 4 years old and traveling from Hong Kong with his parents and older brother to their ancestral village in Guangdong Province. It was 1936, in a China without six-lane highways and gleaming airports. They were returning to the countryside to build a new family home.” (Edward Wong, Sinosphere)

Interesting. “Though there are currently 15 football teams from several European leagues with an official presence on Chinese social media platforms in China with over 100,000 followers each, the Premier League and La Liga are the only national leagues to have an official presence on Sina Weibo, China’s number one micro-blogging site.” (Kawo Blog)

Posters asking Beijingers to behave themselves when traveling abroad pic.twitter.com/HuKgIaNJnx

“The 3 worst attacks on foreign journalists in China in 2013.” (China Hush)

“How I unintentionally ended up spending 15 years of my life in North Korea.” (NK News)

“Sochi Winter Olympics: How Did China Do?” (WSJ)