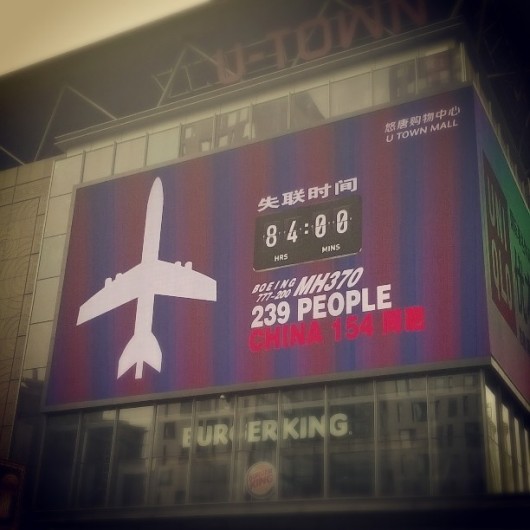 Those who live and work around Chaoyangmen in Beijing have noticed a recent addition to the neighborhood. Above the Burger King at U-Town Mall, a huge purple banner has been erected that reads, in Chinese, “Time Since Losing Contact,” a reference to the number of hours that have passed since the disappearance of Malaysia Airlines Flight MH370.

Pictures were uploaded to Instagram by Time Out Beijing (above) and @Howick_Leung (below).

This comes at a time of anger from both representatives of the Chinese government and the friends and relatives of the passengers on MH370. As the New York Times reports, Malaysia Airlines employees were in Beijing on Monday morning to address the relatives of passengers, but the meeting didn’t go well:

“All Malaysians are liars!” one man shouted in Chinese. “Do you know what ‘liars’ means?”

“Tell him in English,” he yelled to the one woman among the four airline employees. She was the interpreter, and the three men were senior managers.

They did not respond to the Chinese man. It was unclear if the interpreter translated the insult.

MH370, bound for Beijing from Kuala Lumpur, disappeared somewhere between Malaysia and Vietnam on Saturday. The search is now entering its fifth day.

The picture above — which shows the counter at 84 hours — is outdated. 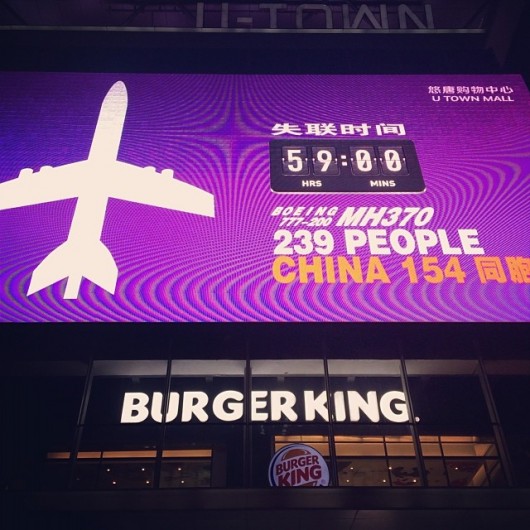