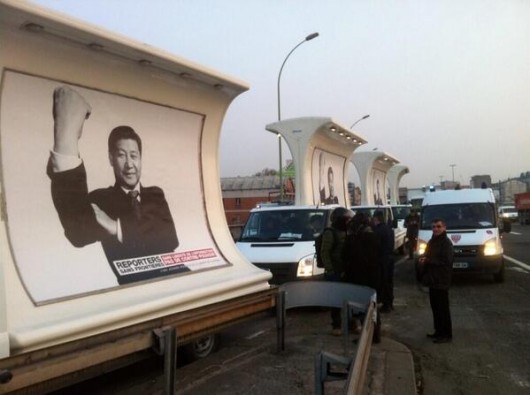 We’re calling it the Sunflower Revolution? “They call it the Sunflower Revolution. Last Tuesday, scores of university students stormed into the legislature in Taipei and took over the premises. Their grievance? Kuomintang, the country’s ruling party, tried to ratify a controversial trade agreement with mainland China without proper review by lawmakers. A few days later, a smaller group raided the cabinet building but were later removed by riot police. In all, over 10,000 people participated in the largest student-led protest in the country’s 65-year history.” (SCMP)

Wukan update. “Three years ago the people in the village of Wukan overthrew the government in violent revolt to protest against sales of misappropriated land. The provincial government agreed to allow a democratic election, and Wukan was viewed by some as a possible harbinger of reform. // Now a new village election is nearing, but the tale it tells is a familiar one of control and corruption.” (WSJ)

State visit. “Chinese President Xi Jinping was the toast of France as he embarked on a state visit — and what better time just days after China ended an anti-dumping, anti-subsidy investigation of French wine.” (AP)

Beijing stabbing. “A man in the suburb of Beijing stabbed six people to death and injured several others over a dispute about property on Thursday, Beijing police said on weibo. // Police said the man, 34, lived in Wanghua village, Hairou district – a suburb of northern Beijing. // Police only gave out the man’s surname, Zhao, and said his family members claimed he had a history of mental illness.” (SCMP)

Don’t miss it! “China is warming up for its bid to host the 2022 Winter Olympics with an event of almost equal stature: the World Men’s Curling Championship, which kicks off in Beijing on Saturday.” (WSJ)

Chinese upset at Time description of MH370 passengers’ relatives in Lido Hotel. “It has been weeks since the Malaysian flight MH370 disappeared with 239 passengers on board, and media all over the world have covered various aspects: what’s happening, what will happen, rescue efforts, the Malaysians’ bewildering and incomprehensible response, and the passengers’ desperate relatives. TIME magazine has covered it too, and to many Chinese, rather badly. One report, ‘The Disappearance of Flight 370′ proved the epitome of patronizing journalism, looking like the writers had stepped out in the wrong decade, such was its dodgy political incorrect nature.” (Time)

Not unexpected. “Mainland travel agencies have reported a sharp drop in the number of Chinese visitors to Malaysia. // Some mainlanders, led by celebrities, were also calling for a tourism boycott to the popular holiday destination following the disappearance of Flight 370 on March 8.” (SCMP)

“In China, an odd mix of bawdy and serious.” (China Media Project)

“Bloomberg in China: It’s Not About the Terminals, It’s About the Data.” (James Fallows, The Atlantic)

“Love Anywhere: a short story by H.L.” (the Anthill)

“Chinese Police Beat Stray Dog to Death in Front of Its Owner.” (chinaSMACK)