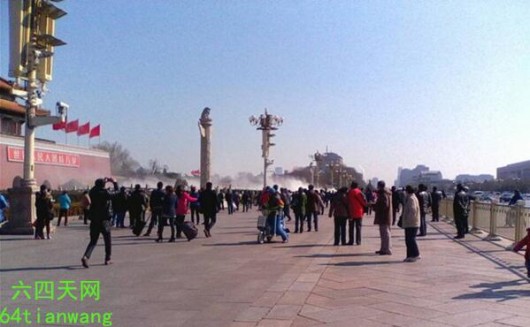 Woman sets herself on fire at Tiananmen? Via Rob Schmitz

Seriously, in case you’ve forgotten: “Chinese President Xi Jinping on Tuesday called for ‘concrete actions’ by the country’s volunteers in learning from the spirit of Lei Feng, the nation’s most famous Good Samaritan.” (Xinhua)

China, Russia, and Ukraine. “Russian Foreign Minister Sergei Lavrov and his Chinese counterpart Wang Yi in a phone call noted ‘broadly coinciding points of view of Russia and China over the situation,’ the Russian foreign ministry said. Russia appeared keen to stress that it has a major international ally on its military intervention in Ukraine after the other members of the G8 on Sunday released a statement condemning Russia. China is not a member of the G8. // When asked about Ukraine at a regular press briefing yesterday, foreign ministry spokesman Qin Gang answered indirectly. ‘China has always upheld the principles of diplomacy and the fundamental norms of international relations,’ he said.” (Reuters)

Free Ilham Tohti. “Hopes are fading over the plight of a jailed Uyghur rights activist — and for a middle-way solution to escalating ethnic tensions with China’s majority ethnic Han that he represents — with the imprisoned activist’s lawyer saying Tuesday that he fears his client may face the death penalty.” (Al-Jazeera)

Note to self: never get a shot in Henan. “Villagers from a county in the central province of Henan say they are still seeking justice almost two years after a doctor admitted reusing syringes and nearly 1,000 people were found to have hepatitis C. // The scandal, which has received little attention so far, started to unfold in May 2012 when doctor Li Junchao was detained and charged with illegal medical practices. For more than thirty years Li ran a tiny, run-down clinic that served the village of Jinggang in the county of Qi.” (Caixin)

Buses, what’s up? “A fire on a passenger bus in northeastern China killed at least 10 people and injured 17 on Wednesday, officials said, in the country’s second deadly bus fire in less than a week.” (AP)

Kunming. “In general, the city felt ridiculously normal for the day after the attack . The people manning the gate at my compound greeted me as cheerily as I scooted down the hill and the only armed police I saw were hanging around a major interchange. Most people ambled lazily around Green Lake park, gazing at the flocks of sea gulls on their way back to Siberia as if nothing had happened. Not a SWAT team to be seen, even though this would be a potential spot for carnage. Kunming’s 1st People’s Hospital also had only a few law enforcers stationed outside, a shrill contrast to the mob of police inside that was trying to keep nosy journalists at bay.” (East by Southeast)

Iffy sourcing, but interesting. “A group of knife-wielding attackers who went on a weekend slashing spree at a train station in China’s southern Yunnan province may have been disgruntled ethnic minority Uyghur asylum seekers who felt ‘trapped’ between violence in their Xinjiang homeland and the inability to flee across the border into Laos, sources say. // Chinese authorities have labeled the eight assailants accused of killing 29 people and injuring 143 others in the “terror attack” at the railway station in Yunnan’s capital Kunming as separatists from the troubled Xinjiang Uyghur Autonomous Region — more than 1,500 kilometers (900 miles) from the province.” (Radio Free Asia)

Protesters throw leaflets on Tiananmen, are dragged instantly at flag raising ahead of Parliament opening pic.twitter.com/9bVdF8OF6q

Happy interlude, via The World of Chinese:

For a rainy day: “The Best of Bad Chinese TV.” (The World of Chinese)

“In praise of… being a China expat.” (The Nanfang)

“’I am a Xinjiang Person’: Weibo users rally against stereotyping in the wake of terrorist attack.” (China Hush)

A serious guide about those meetings… (WSJ)

“Starting today, Chinese consumers will be able to buy almost anything inside WeChat.” (Tech in Asia)

Via That’s Online: “A propaganda film promoting China’s Muslim Uyghur majority province, Xinjiang is a Good Place, was broadcast on a giant LED screen on Tiananmen Square on Monday”: 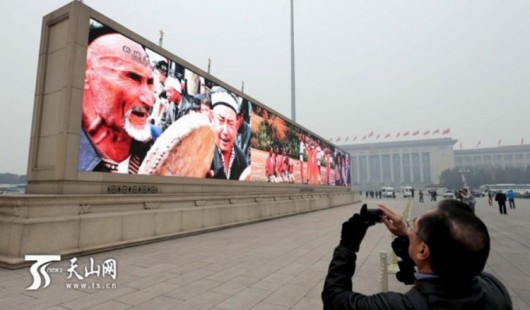