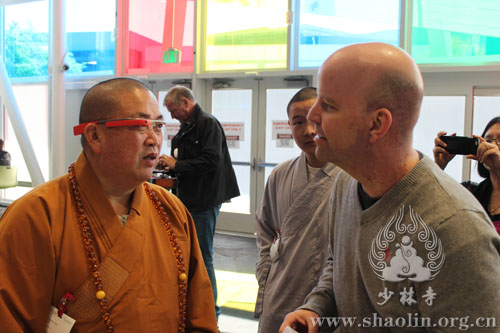 Game 4 of the CBA finals is happening right now in Beijing, just for your information. The Ducks, never known as a good rebounding team, got outrebounded 61-44 in their Game 3 loss, which is ridiculous links.

Taiwan protest update. “Hundreds of protesters stormed the Executive Yuan in Taipei on Sunday evening, shortly after Taiwan’s president Ma Ying-jeou dismissed protesters’ demands to scrap a service trade agreement with China. Opponents of the deal say it could harm Taiwan’s economy, democratic system and national security. // Police used high-pressure water cannons to disperse the demonstrators, who were mostly university students. // Meanwhile, other protesters continue their sit-in at the nearby legislature building, where they have been since March 18.” (CNN)

Elsewhere in Taiwan. “A cultural brawl is brewing between China and Taiwan over a seemingly innocuous snack: the tea-flavored egg. // The roots of the controversy lie in an undated Taiwanese TV segment featuring a guest consultant who says that common Chinese people can’t afford ‘tea eggs,’ hardboiled eggs simmered in tea leaves, spices and soy sauce that are a popular snack in Taiwan, China and beyond.” (WSJ)

MH370 update. “The crashed Malaysia Airlines flight gave one last unexplained signal eight minutes after its final ‘ping,’ possibly the result of the plane entering its ‘catastrophic phase’ as it plunged into the Indian Ocean, investigators have said.” (The Telegraph)

Americans hack Chinese company. “American officials have long considered Huawei, the Chinese telecommunications giant, a security threat, blocking it from business deals in the United States for fear that the company would create “back doors” in its equipment that could allow the Chinese military or Beijing-backed hackers to steal corporate and government secrets. // But even as the United States made a public case about the dangers of buying from Huawei, classified documents show that the National Security Agency was creating its own back doors — directly into Huawei’s networks.” (NY Times)

Obamao taken off racks for a day – but why? First Lady would’ve loved them. “According to a pool reporter who was at the Great Wall of China for Michelle Obama’s visit there today, ‘Chinese authorities made sure, for a day, that Mutianyu [a section of the Great Wall] was visibly free of Obama-Mao t-shirts.’ For $60, however, a merchant told the pool reporter that she’d sell him one of those t-shirts.” (The Weekly Standard)

Sad. “A baby has died after being born prematurely on a Cathay Pacific flight from Hong Kong to New York in a medical emergency that forced the plane, with 279 people on board, to divert to Japan. // The women, understood to have been in the later stages of her pregnancy but medically cleared to fly, went into labour some hours after the Boeing 777-300 took off from Hong Kong on Sunday afternoon.” (SCMP)

Whoa. “The United Nations has barred a Chinese man from attending the Human Rights Council in Geneva after he photographed at close range a woman who gave testimony about her father who is serving a life sentence in China for his political activities. The United Nations said the photography was ‘intimidation.’ // The incident drew attention to an open secret that is nevertheless rarely so clearly demonstrated — that some Chinese groups listed as nongovernmental organizations are in fact actively working to promote the Communist government’s political goals and may spy on people that Beijing considers hostile to its interests.” (Sinosphere)

Liu Xia update. “The wife of jailed Nobel Peace Prize laureate Liu Xiaobo, Liu Xia, has been able to have medical examinations and treatment, and her health condition has improved. She had been prevented from receiving the treatment she needed after suffering a heart attack in January. She continues to be held under illegal house arrest in Beijing.” (Amnesty International)

Vanished scholar. “A Chinese-born academic at Kobe University who has done prize-winning research on ethnic Uighurs in China seems to have vanished into thin air after returning to his homeland for a brief visit. // University officials are trying to contact 57-year-old Wang Ke, a professor of area cultural studies in the Faculty of Intercultural Studies.” (The Asahi Shimbun)

On Car Sick Cars. “Oooh, a Chinese band that sings for foreign audiences goes abroad and sings for different foreign audiences! // Nothing wrong with it, but I wish people would look at bands like Carsick Cars as what they are, i.e. a minor phenomenon that says more about the tastes of non-Chinese audiences (in this and many other cases, Michael Pettis) than about anything else. No, they are not indicative of anything broader. No, the fact that they wrote a song called ‘Zhongnanhai’ doesn’t mean anything.” (Brendan O’Kane)

Yikes. “A Chinese court has handed an 18-month jail term to a man who applied to hold a protest on the anniversary of the 1989 Tiananmen Square killings, his lawyer said. // On Monday, Gu Yimin was found guilty of ‘inciting state subversion’ for posting pictures of the 1989 crackdown online and applying for permission to stage a protest on its anniversary last year, his lawyer Liu Weiguo.” (Al-Jazeera)

Does anyone else get that 90s song “Saturday Night” in their head whenever anyone says #DiDiDaChe? http://t.co/a8kOtxLsjk #china #dancemix95 — Allie Jaynes (@AllieJaynes) March 25, 2014

“The First Lady’s Trip to China.” (The White House)

“Matchmaker shares the best places to pick up girls in Beijing.” (China Hush)

“Another Bloomberg Editor Explains Why He Has Resigned, Over Its China Coverage.” (James Fallows, The Atlantic)

If you think “Beijing Cream” is dirty, try “ChinaBang.” (TechNode) 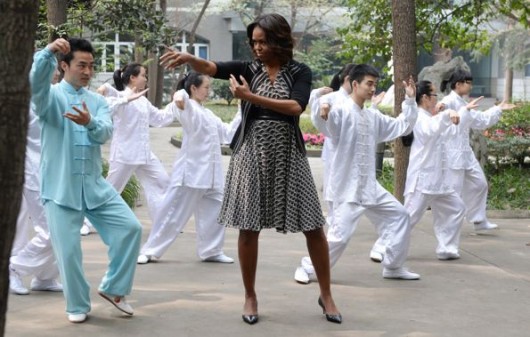 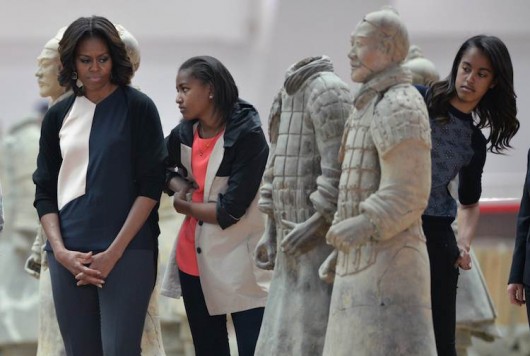