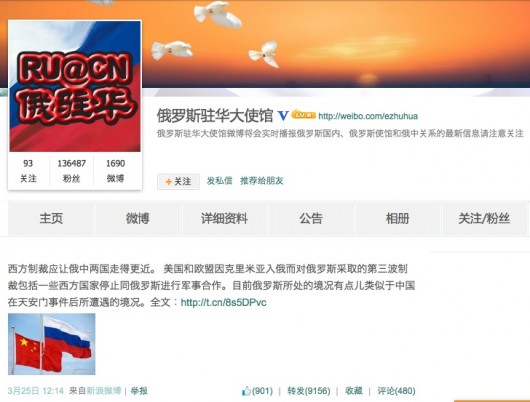 As the US and EU prepare to levy economic sanctions on Russia for its actions in Ukraine, Russia’s leaders may be growing desperate to find support wherever they can. On Tuesday at 12:14 pm, the official Sina Weibo microblog of the Russian Embassy posted a message that, in no uncertain terms, sought Chinese empathy. There was one big problem: the post contained a remarkably tone deaf reference to the “Tiananmen Incident,” i.e. the 1989 student protests in Beijing that resulted in a violent government crackdown, i.e. the one event that no one here is supposed to talk about.

The Russian embassy compared the current sanctions against them to the sanctions against China following its June Fourth crackdown, which you may have heard referred to as a “massacre.” Is Russia foreshadowing what’ll happen in the Crimea if Ukraine doesn’t cooperate?

The reference amounted to “ripping open [our] wounds,” as one netizen commented; “selling out comrades,” wrote another.

Two days after the posting, the weibo is still up. Do Sina’s censors have limits? Does their censoring power stop at the verified accounts of foreign embassies?

Bernd Zhang of Hug China first alerted us to this story. We thank him for translating part of the Russian embassy’s message:

Western sanctions should bring China and Russia closer. The third wave of sanctions imposed by the US and EU on Russia over the annexation of Crimea includes cancellation of military cooperation with Russia. The current situation in Russia is somewhat similar to what China encountered after the Tiananmen Incident.

We wonder how many people even get the reference? Hug China has translated some netizen responses:

我是你影子____：A dying man wants someone to accompany him to the hell.

个记尴尬了：Idiot Russia, who goes closer with you?

我是李鸽：Russia, haven’t you done enough harm on us?

木秋亦：Go away! Who is your friend? Do not drag us into the same water! West is the largest market for us.

忽悠人被忽悠：Already reported to authority. Where and when did what incident happen? There is not a clue on Baidu so it must be a rumor!

Diplomacy in the digital / social media age sure can be interesting.