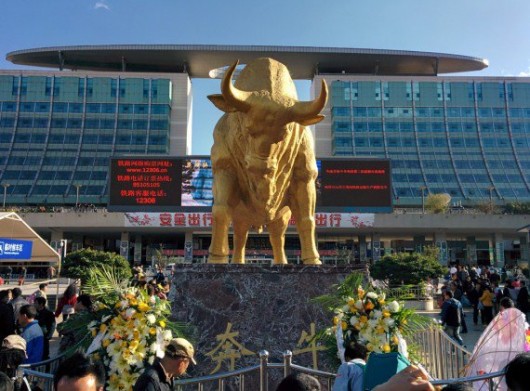 Kunming Railway Station aftermath, via A World of Nonging

“Citizens throughout the world took to the Internet on Sunday to offer their condolences and prayers after a group of knife-wielding attackers killed at least 29 people and injured 130 others at the railway station in Kunming in southwest China.” (Global Voices)

“The attack will be a milestone event that marks a turning point of how ordinary Chinese people perceive situations in Xinjiang. Ethnic unrests, especially violent clashes between Han people and Uighur people, are not uncommon in this far western region of China. While the Chinese government has invariably portrayed all unrests as acts of separatism orchestrated by Islamist extremists, many Chinese people actually do acknowledge that violence by Uighurs, to a certain extent, is provoked by the government’s repressive policies and religion restrictions. // The Kunming train station attack, however, took away many people’s sympathy for the Uighurs.” (Offbeat China)

“The United Nations Security Council has condemned as a ‘terrorist attack’ the slashing rampage Saturday night in a train station in the southwestern city of Kunming, in which a group of black-clad assailants with knives and daggers killed at least 29 people and wounded 143. Hong Kong news outlets said about 75 of those may be severely injured.” (Sinosphere)

“China’s President Xi Jinping ordered a crackdown on ‘violent terrorist activities’ after 33 people died when knife-wielding assailants rampaged through a train station in a southwestern city on March 1.” (Bloomberg)

Knives used in attacks, via CNS via That’s Online: 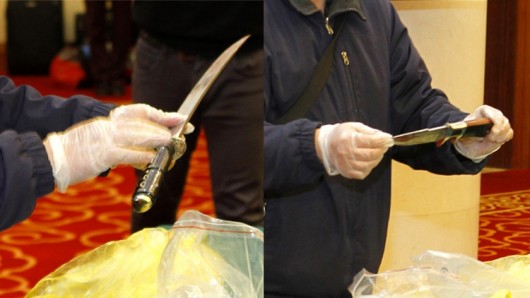 On that racist farewell to Gary Locke. “Banana or Twinkie for ‘white-on-the-inside’ East Asian Americans, Oreo for African-Americans, coconut for South Asian-Americans, apple for Native Americans—these epithets are all products of the simplistic, groundless belief that one’s ‘race’ should correspond to a (rarely defined) set of behavioral norms, to a locus of identity and loyalty.” (Kaiser Kuo, ChinaFile)

Since the Oscars just happened and all. “Film producers who have watched the rapid growth of Hollywood’s interest in China’s film industry (mostly for its ready cash and its hungry, growing moviegoing public) are not surprised by Jia’s absence from the Oscars. It takes considerable money and marketing muscle to sculpt a contender in the eyes of the Academy members who nominate and then vote on the Oscar winners, says Janet Yang, who, in 1986, was on the first Hollywood studio delegation to China after the Cultural Revolution. // ‘How often has a foreign-language film ever been nominated for Best Picture?’ Yang asks, answering her own question. ‘Almost never.’” (Asia Society)

Guiyang bus arsonist. “A man suspected of starting a bus fire that killed six people was arrested on Friday, police with southwest China’s Guizhou Province told Xinhua. // The man, surnamed Su, ‘took revenge on society’ by igniting a barrel of gasoline on the bus, ending in tragedy, said the police source.” (Shanghai Daily)

Only returning the results a person really needs. “China has a new search engine today, though most web users won’t notice or ever visit it. The brand-new ChinaSo is a state-run search site that Sina Tech believes is run by the vice president of the Xinhua news agency, Zhou Xisheng.” (Tech in Asia)

Protest in Hong Kong. “Thousands of Hong Kong residents marched peacefully on Sunday to voice their support for press freedom and to denounce violence after a near-deadly assault on a former newspaper editor who has become a symbol of the pressures squeezing the local news media. // The protesters, led by journalists and joined by students, political activists and even taxi drivers, heard speakers calling for respect for the rule of law and for a strong government effort to find whoever was responsible for the assault on Kevin Lau Chun-to, the former chief editor of the newspaper Ming Pao.” (NY Times)

“Man I Love House of Cards,” by Bo Xilai. (Ministry of Harmony)