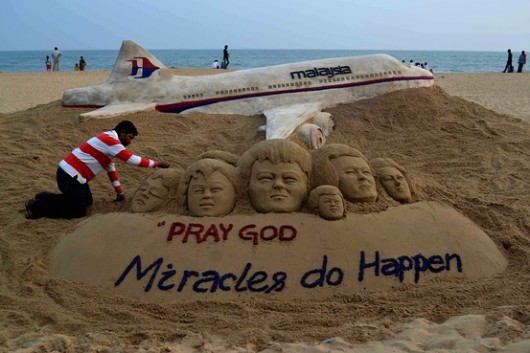 As some of you may know, I’m moderating a blogging event with Jeremy Goldkorn, Alec Ash, Mia Li, and Tao Stein on March 18. We’ve just received word that, due to demand, the venue has changed from iQiyi to The Bookworm. We’ll have more information about this later in the week. For now, links.

The story of the weekend is Malaysian Airlines flight (MH 370), which disappeared from Kuala Lumpur to Beijing on March 8. It was carrying 239 people, including 152 Chinese Nationals. Here are some related stories:

Update: “Despite the efforts of 34 planes, 40 ships and search crews from 10 countries, officials have not found any sign of a Malaysia Airlines flight that went missing nearly three days ago.” (CNN)

How does a flight “disappear”? “Officials investigating the disappearance of a Malaysian airliner with 239 people on board are narrowing the focus of their inquiries on the possibility that it disintegrated mid-flight, a senior source said on Sunday.” (Reuters)

Cause? “A technical fault, disintegration, or terrorism are among possibilities under scrutiny as search for wreckage continues.” (The Guardian)

Blame? “Malaysia Airlines was convicted two years ago for boarding a passenger against the wishes of a foreign government by falsifying passport identity records, it has emerged, and was also prosecuted for a similar incident in 2007.” (SCMP)

Uncertainty for those waiting. “A Tense Wait in Beijing For News of Missing Malaysia Airlines Jet.” (WSJ)

Artists among those missing. “An entourage of artists was aboard the missing Flight 370 after completing an exhibition in Kuala Lumpur, an organiser said yesterday. // A group of 29, comprising 19 painters and calligraphers, six relatives and four staff from the Chinese organiser’s company, were on the flight.” (SCMP)

Final Destination stuff. “A Chinese journalist is thanking his newspaper for a schedule change that meant he was not on the missing Malaysia Airlines flight. // Xu Jin, who works for Yangtze Evening News, was on a business trip to Malaysia and had been due to fly to Beijing for an interview. However, a week before he left for Malaysia the  visit was canceled.” (Shanghai Daily)

Terrorism? “Saturday European officials indicated two of the people on board were using passports that had been stolen in Thailand. On Sunday Malaysia’s transport minister, Hishammuddin Hussein, said Malaysian intelligence officials were also checking the identities of two other passengers, according to The Associated Press. // ‘All the four names are with me and have been given to our intelligence agencies,’ Hishammuddin said, according to The AP. ‘We do not want to target only the four; we are investigating the whole passenger manifest. We are looking at all possibilities.’” (Washington Post)

Again, that’s nominal salary. “Based on available information, if Chinese President Xi Jinping were to decide to buy a 100-square-meter (about 1,080-square-foot) two-bedroom apartment in central Beijing, it would set him back almost $1 million at current prices. That means Xi, who by all appearances draws a nominal annual salary of about $20,000, would have to toil for 50 years as China’s top leader to afford this modest property — assuming, that is, that he and his family didn’t pay for any other living expenses during that time.” (Tea Leaf Nation)

Whoa. “The local Chinese official remembers all too clearly the panic he felt in Room 109. He had refused again and again to confess to bribery he says he didn’t commit, and his four Communist Party interrogators were forcing his legs farther apart than they could go. // Zhou Wangyan begged them to stop. But the men taunted him and kept pushing. // Then, with a loud ‘ka-cha,’ his left thigh bone snapped. The sickening crunch reverberated in his mind, nearly drowning out his howls of pain and the frantic pounding of his heart. // ‘My leg is broken,’ Zhou told the interrogators. According to Zhou, they ignored his pleas.” (AP)

Hopefully this doesn’t bode badly for VPNs. “About 90 percent of violent terrorists use means such as VPNs (Virtual Private Networks) to circumvent the Great Firewall and the increasing amount of terrorist attacks is part of the international trend, the top leader of the Xinjiang Uyghur Autonomous Region said on Thursday. // The wide use of information technology is one of the characteristics of recent terrorist activities and the authorities need to raise awareness, and use professional and advanced ways to stop it from spreading across the country, Zhang Chunxian, Party Secretary of Xinjiang said at the Xinjiang delegation’s meeting during the National People’s Congress.” (Global Times)

Don’t you love bureaucracy? “Since March 1 when China Railway Corporation launched stricter measures to check ticket information with identity cards or passports, foreign names have been falling victim to overly officious officials, say travelers and their agents. // The new policy demands all personal information on the ticket be in exact accordance with a passenger’s identity card or passport.” (Global Times)

Pedophile was in Shanghai. “The defendant, Hector Orjuela Jr, 47, from the US, pleaded guilty in October 2013 to two counts of engaging in and attempting to engage in illicit sexual conduct in a foreign place, according to a press release from the US Department of Justice. He was also charged with one count of producing child pornography. // Orjuela admitted to molesting two girls and attempting to molest a third last year in Shanghai and the state of Maryland, the press release said. All three girls were under the age of 12.” (Global Times)

It costs a shitload to join. “Popular matchmaking service, Meimeng, is on a nationwide search for the top 100 single women in China. Last weekend, they held a recruitment session in Shenzhen. The finalists will receive a private matchmaking session and will be invited to attend a blind date party in Sanya this June in the hopes of meeting that special someone, Shenzhen News reports.” (The Nanfang)

“Lost then found: a tale of bike theft in Beijing.” (Tom O’Malley)

“Pudong from The Bund,” photo from this set by eggy-weggs, via Reddit: 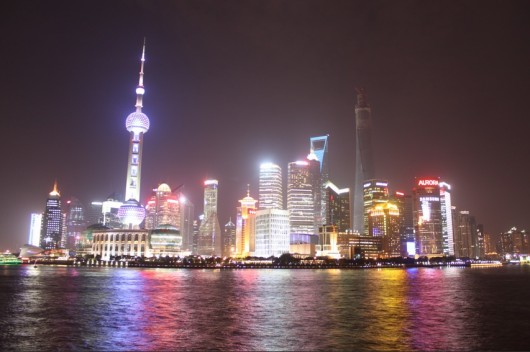